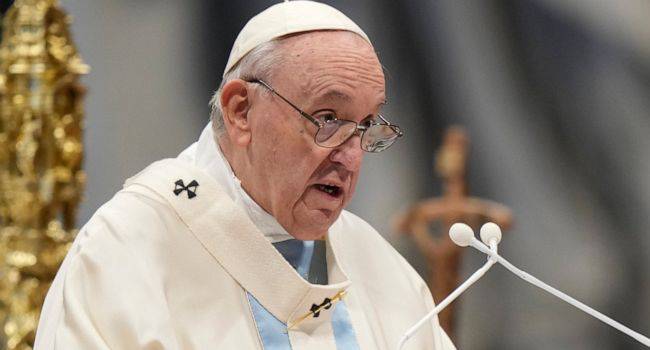 A Facebook user by the name, Nathan Kuma in a post, claimed that Pope Francis, as part of his reform, had cancelled the Bible and proposed the creation of a new holy book.

The poster reads: “Pope Francis cancels the Bible and proposes to create a new book. According to him the Bible is totally outdated and in need of radical change, and for that reason is officially cancelled. The book that will replace it, as well as the content will be announced by the Church.”

He quoted the Pope thus: “We cannot keep trying to talk to our audience in a completely new world with an old book of several thousand years. We are losing disciples and we have to seek to modernize the church, rewrite the Word of God, even if it is the Old Testament, in which there are certain passages which are better not repeated”

The post continued: “I totally agree with the Pope. The Bible which was compiled at the Bishops Conference of Nice in Constantinople (present day Turkey) has too many discrepancies, and the contradiction is staggering! In this modern age where people are smarter and more enlightened and intelligent that ‘compilation’ isn’t working any more and for that reason the ‘authors’ of that compilation need another think.”

While a few doubted the claim, many commenters thought it was true without verifying. For instance, one of the comments reads: “We have been in bondage for a long time. Let know the truth and be free”

When the claim was challenged by one of the commenters, a reply was posted with a link to a YouTube video, presumably to back up his claim. However, when Ripples Nigeria played the video, nothing in it proved or bare credence to the claim.

Instead, the video highlights the demography of catholic faithful in the world. It stated that Africa’s Catholics have increased by 15%, while the population of Catholic Christians in Europe has decreased by the same percentage. The commentator in the video blamed the shrinking membership of Catholics in Europe on corruption, and sex scandals. The crux of the video is the disparity in the practice of Catholicism in Africa and Europe, as well as criticisms against the faith among Europeans. It has nothing to do with Pope Francis allegedly canceling the bible. In fact, the revered leaders did not feature in the video which was published 8 years ago.

The poster later admitted in a subsequent reply that the claim was false. However, many viewers had believed it, as evident in the comment box

Also, speeches of and events concerning the Pope, as well all activities of the Roman Catholic Church are always published by the Holy See Press Office Bulletin website. However, a check by Ripples Nigeria did not return with results on the Bible being canceled or replaced by a new book.

In addition, Bishop Emmanuel Badejo who is a Member of the Dicastery for Communication in Rome, refuted the claim, saying it is one of the fictitious narratives being circulated on social media about the Catholic Church.

Responding to an inquiry by Ripples Nigeria, he said, “ignore it as nonsense. Anyway tell them to furnish you with the date, occasion and the audience to which the Pope made this declaration. I tell you solemnly if such a thing ever happened, with every sense of modesty, I should know. There are many such fiction circulating all around.

“The Church has very well defined processes of responding to the changing needs of the times. Tampering with the essentials of faith like the Word of God is certainly not one of them”.

Meanwhile, in 2019, the Pope approved an alteration of the biblical ‘Lord’s Prayer’ which Jesus taught his disciples when they asked him how to pray.

Pope Francis, with the backing of the general assembly of the Episcopal Conference of Italy, instructed Catholics to say “do not let us fall into temptation”, instead of “lead us not into temptation”, as contained in the Bible.

The pope had justified the alteration in 2017, arguing that “it is not a good translation because it speaks of a God who induces temptation.”

“I am the one who falls. It’s not him pushing me into temptation to then see how I have fallen. A father doesn’t do that; a father helps you to get up immediately. It’s Satan who leads us into temptation – that’s his department,” he added.

Neither the official press centre of the Vatican nor any credible media outlet reported that the Pope at any time canceled the Bible. We, however, found a credible report of the Pope altering a section of the bible – ‘The Lord’s Prayer’.

FACT CHECK: Did Elon Musk promise to buy Facebook and delete it?

FACT CHECK: The story behind the picture of a Japanese boy carrying his dead brother