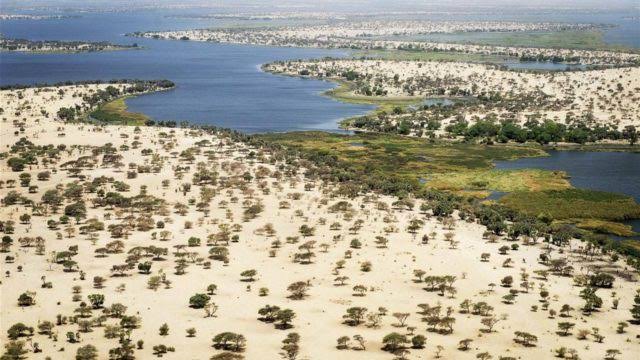 Claim
“Climate change is largely responsible for the drying up of Lake Chad which has shrunk by more than 85% of its original size,” President Muhammadu Buhari, 26 October, 2021, Riyadh, Saudi Arabia.

Verdict
Yes, Lake Chad had a crucial shrinking in the 1970s and 1980s due to drought causing about 90% loss where the surface area moved from 25,000km2 to 2000km2. However, the lake has been increasing since the beginning of 1990s especially in the southern pool of the lake.

Full Text
At the fifth edition of the future investment initiative summit held in Riyadh, Saudi Arabia, President Muhammadu Buhari in his speech where he listed his achievements and challenges in office. The president noted the effect of climate change in the country with more reference to the drying of lake Chad.

In his words; “Climate change has triggered conflicts, food insecurity, irregular migration, rising level of sea waters, drought and desertification as well as the drying-up of Lake Chad,” Buhari mentioned.

“In the Lake Chad Basin region, where Boko Haram insurgency continues to undermine the peace, security and development of the region, climate change is largely responsible for the drying up of Lake Chad which has shrunk by more than 85% of its original size.

“The diminishing size of the lake is at the roots of the loss of millions of livelihoods, displacement of inhabitants and radicalisation of teeming youths who are recruited to serve as foot soldiers in the insurgency.”

This is not the first time President Buhari is emphasising on the drying up of Lake Chad. He also mentioned it to the United Nations at its general Assembly in September 2019.

“Lake Chad is shrinking while the population is exploding. It’s a challenging situation. With less land, less rainfall, these are very unique problems for the country,” said President Buhari.

Verification
Ripples Nigeria’s research shows that after the dryness blow that hit the Sahel region in the 1970s -1980s and led to drying up of Lake Chad. The Lake has not been shrinking for the past two decades rather it is increasing, although the lake is yet to reach the size it was before the 1970s.

One great consequence of that climatic factor was dividing the lake into two — Northern pool and Southern pool.

In one scientific publication retrieved by Ripples Nigeria which was authored by Researchers from French Universities titled: “The Lake Chad hydrology under current climate change” published March 2020, the researchers analysed Lake Chad shrinking and expansion over a period of seven decades.

“Using a new multi-satellite approach, we show that Lake Chad extent has remained stable during the last two decades, despite a slight decrease of its northern pool. Moreover, since the 2000s, groundwater, which contributes to ~70% of Lake Chad’s annual water storage change, is increasing due to water supply provided by its two main tributaries,”

The report noted that, though Lake Chad has been the symbol of climate change due to the 1970s-1980s shrinkage, “Our results indicate that in tandem with groundwater and tropical origin of water supply, over the last two decades, Lake Chad is not shrinking and recovers seasonally its surface water extent and volume.”

Another report sponsored by the foreign ministries of the German government and Netherlands government titled: “SHORING UP STABILITY: ADDRESSING CLIMATE AND FRAGILITY RISKS IN THE LAKE CHAD REGION” was published in 2019 and corroborated the research from the French Universities.

“Whilst the lake contracted significantly due to drought in the 1970s and 1980s, our research finds that the lake is currently not shrinking.”

Corroborating the report was the significant changes noted on the Google Earth Engine Time lapse from 1984 to 2020. It shows how Lake Chad has decreased and Increased in size since 2000.

Although Lake Chad is not shrinking and it is not drying up, other Climatic conditions are affecting the lake and the region as a whole which includes high levels of rainfall and wide temperature variability as noted in both research.

FACT CHECK: Is the cost of transport bonus to poor Nigerians higher than fuel subsidy?