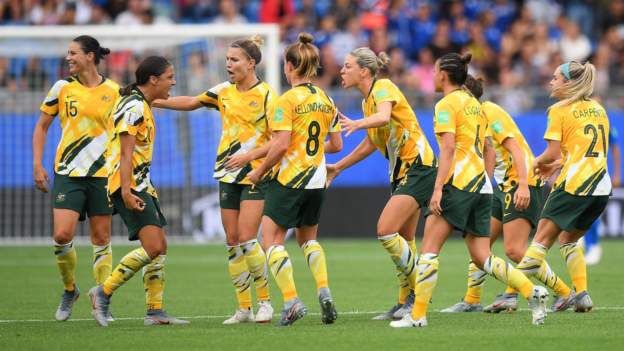 The South Americans squandered a two-goal lead as Australia came from behind to win 3-2 in the extraordinary game.

The Matildas suffered a surprise defeat by Italy in their opening game, but the win over Brazil has revived their hopes of advancing from Group C.

A 27th-minute Marta penalty opened the scoring for Brazil and Cristiane’s fourth strike in two matches doubled their lead in the 38th minute.

Caitlin Foord poked in a finish at the stroke of halftime to halve the deficit, before Chloe Logarzo’s cross-shot levelled both team on 58 minutes.

Superstar, Martha was withdrawn during the break, having had a knock during the first 45.

With both sides searching for a winner, defender Monica’s unfortunate own goal – which was eventually awarded by VAR – gave the victory to Australia.

The goal completed the remarkable comeback, and took Australia to same level as Brazil and Italy in the group.

The group’s other matchday two game between Jamaica and Italy will hold in Reims on Friday.