Home » Politics » HOW PROMINENT ‘MEN OF GOD’ MISFIRED: All the failed prophecies on 2019 elections 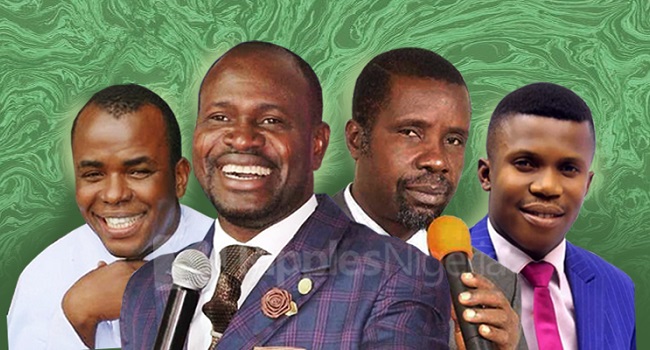 It has become a norm for Nigerian men of God to reel out prophecies of who will win or lose a particular elective position during any electioneering period. As a highly religious nation, Nigeria boasts of a plethora of spiritual leaders and/or clerics who have strong followership, running into millions of people, both nationally and internationally.

Thus, their words, declarations, predictions or prophesies are taken as sacred because people believe that they hear directly from God. Their followers are always of the orientation or view that it is a sin of great proportion to attach any iota of doubt to what their spiritual leader had said.

Prior to the 2019 general elections, prophecies of who will win especially the presidential election filled the air. There were prophecies that the incumbent President Muhammadu Buhari, of the All Progressives Congress (APC), will lose the election while the candidate of the Peoples Democratic Party (PDP), Alhaji Atiku Abubakar, will win and vice-versa.

We take a look at the failed prophecies that characterized the elections.

Primate Akeju’s prophecy was the exact opposite

Primate E.O. Akeju of the New Holy Messiah Church in Ilasamaja, Lagos, prophesied: “I forsee Atiku Abubakar becoming next President of his country but there are strong forces behind his plan. God revealed to me that Atiku’s regime will bring peace and harmony to the nation, unlike what we are presently experiencing…Governor Akinwunmi Ambode will also retain the Lagos seat without any opposition.”

It is glaring to the blind and loud to the deaf that President Buhari won Atiku at the just concluded presidential election. In the case of Governor Ambode, he was unable to win his party ticket and thus, was unable to contest for a second term. Here, the Primate misfired in two areas.

The Presiding Bishop of Divine Seed of God Chapel Ministries, Prophet Wale Olagunju, in an interview with The Sun, published on Sunday, October 28, 2018, did prophesy that Alhaji Atiku Abubakar will defeat President Muhammadu Buhari in the 2019 presidential election.

In his prophecy, he stated: “Let me congratulate President Muhammadu Buhari for winning the ticket of his party, the All Progressives Congress (APC), and let me also make it clear to him he will lose to Atiku Abubakar. Let me also congratulate Atiku in advance because he will win the next presidential election come 2019.

“Let me say, as a matter of fact, that Buhari does not need an Alfa or Prophet to deceive him that he would win the election, for as God lives, he would lose. You remember I predicted the return of notable APC members back to their former home, to be frank, big guns in APC will soon decamp and begin to campaign for Atiku. It is then that Buhari and the so-called APC will realize that the party is as good as dead.

With Obasanjo’s endorsement of Atiku as a better candidate than Buhari, he has fulfilled all biblical righteousness by forgiving Atiku as required by God. Obasanjo congratulated Atiku for winning the ticket of his party. So, I am standing on my prediction that he will not only forgive Atiku, but will also support and throw his weight behind him to win the election. I affirm, with the blessing of Obasanjo now, that the coast is clear for Atiku. That is just the message from the Almighty God.”

The General Overseer of Voice of Liberty Intercessors Ministry in Delta State, Apostle Joshua Mone, in a crossover night service, on December 31, 2018, prophesied that Alhaji Atiku Abubakar would emerge victorious at the presidential polls. Many of his members were jubilant on hearing this from the man of God. However, the presidential election has come and gone and his prophecy did not come to pass.

However, it is on record that Apostle Mone did prophesy that there is a conspiracy to postpone election dates and that there would be fire outbreak in the Independent National Electoral Commission’s (INEC’s) office. The two prophecies did come to pass as the Chairman of the Commission, Prof. Mahmood Yakubu, postponed the general elections, by one week, within 4 hours of its commencement. More so, a few days to the commencement of the elections, before the sudden postponement, it was reported that two containers housing Smart Card Readers were gutted by fire at INEC headquarters in Awka, Anambra State. Also, INEC office in Plateau State was destroyed by fire and in Abia State there was a monumental damage of the Commission’s facilities.

The Spiritual Director, Adoration Ministry, Enugu, Nigeria (AMEN), Rev. Fr. Ejike Camillus Mbaka, during the 2018 harvest and bazaar at his Adoration ground in Emene, prophesied that the governorship candidate of the All Progressives Congress – APC – Senator Hope Uzodinma would come out victorious at the polls.

Fr Mbaka made this prophesy when Senator Uzodinma who represented President Buhari at the Adoration ground, on December 3, 2018, donated N2 million to the ministry and promised that the President will build a hospital in the Adoration ground. This prompted him (Fr Mbaka) to declare: “Uzodinma would become the next governor by the grace of God.”

The fiery Catholic Father’s prophesy got misfired as Senator Uzodinma did not come close to winning the fiercely contested Imo State governorship election which saw former deputy speaker of the House of Representatives, Emeka Ihedioha, emerge victorious at the polls. This is not the first time Fr Mbaka, who is a zealous supporter of President Buhari, will get it wrong with election prophecies. For example, in 2002, he declared a holy war on the then governor of Enugu State, Chimaroke Nnamani, through a special audio tape titled: “This Wicked Generation” in which he specifically stated that the then governor will lose his 2003 re-election bid. But, Nnamani later got re-elected for another four-year term in office and in June 2018, Pastor Reno Omokri, former aide to former President Goodluck Jonathan asked Fr Mbaka about the prophecy he said that peace will come to Nigeria through President Buhari.

A South African-based Nigerian cleric, Prophet Samuel Akinbodunse of Freedom for All Nations Outreach, during a live service at his South African Church, predicted the emergence of a young president at the end of the presidential election.

The recently concluded presidential election saw young presidential contestants like Omoyele Sowore of African Action Congress (AAC), Fela Durotoye of the Alliance for New Nigeria (ANN), Kingsley Moghalu of the Young Progressive Party (YPP) among others. Prophet Akinbodunse most probably have in mind that one of these young presidential aspirants will win the presidential election. However, a 76-year old President Buhari of the APC won and his runner-up was a 72 year-old Atiku Abubakar of the PDP.

A plea for caution

These failed prophecies make a mockery of the power of the Almighty God. There is a need for Nigerian clerics to take adequate caution in dishing out prophecies that never come to fruition.

It is nationwide knowledge that Rev. Chris Okotie has become a serial presidential contestant under the declaration that the Lord told him to contest and effect a lasting change in Nigeria. In the last presidential election, he contested under Fresh Democratic Party (FDP) and there is every likelihood that he will contest again in 2023.

It could be recalled that Prophet T.B. Joshua, of The Synagogue Church of all Nations, predicted that Hillary Clinton of the Democratic Party will win Donald Trump of the Republican Party in the USA Presidential election in 2016. He came under intense criticism when his prediction did not come to pass.

Moreover, one Rev. Chinecherem Oliwe, the founder of the Great Mustard Seed Church in Oyigbo, Rivers State, during the build up to the return of civilian rule in 1999, claimed that God told him that he was the only person ordained to emancipate the country. It is 20 years already. It appears Oliwe is still waiting passionately and patiently on the fulfilment of what God told him.

It is common knowledge that when the prophecy of Nigerian clerics comes to fulfilment, they are glorified and exalted and revered the more. They also become more popular and well sort after. However, when their prophecy fails, it will be that God intervened or it is no longer the will of God for the said prophecy to materialize. Nigerian clerics should reassess themselves and check properly before they make any prophecy to the public.