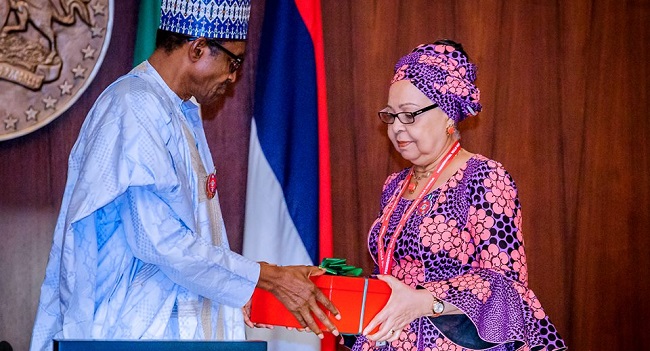 The report of the committee approving N24,000, and N30,000 proposed by the Federal Government and Labour Union respectively was submitted to Buhari on Tuesday.

Consequently, Buhari who also met with leaders of the Organised Labour in the country at the Aso Rock Villa, Abuja, on Tuesday, approved N30,000 the amount the workers union insisted they must receive.

Buhari after giving his approval, promised to forward the new minimum wage bill to National Assembly for action. He also called on Nigerian workers not to allow themselves to be used as political weapons.

The Labour Unions had on Tuesday called off their proposed nation-wide strike after a meeting with government representatives over the minimum wage issue.

Speaking when he received the committee, President Buhari noted that he inaugurated the National Minimum Wage Committee with a mandate to recommend a new minimum wage for the workers of the country.

He said the exercise became necessary for many reasons, as the last review took place in 2011. “We all know since then, the prices of key consumables have increased and the most vulnerable of our workers are struggling to make ends meet.

“Since 2011, many changes have taken place. Nigeria rebased its GDP to become the largest economy in Africa. We reported very strong GDP growth rates and exceptional performance of our capital markets. However, these reported successes did not flow into the pockets and homes of majority of Nigerians, the president stated.

“What is truly inspiring is that, in almost all instances of disagreements, the committee members always came back to the negotiating table with a common goal of improving the welfare of Nigerian workers. On behalf of all Nigerians today, I want to thank you for your commitment and sacrifice in getting us to where we are today.

“Our plan is to transmit the Executive Bill to the National Assembly for passage within the shortest possible time. I am fully committed to having a new National Minimum Wage Act in the very near future.