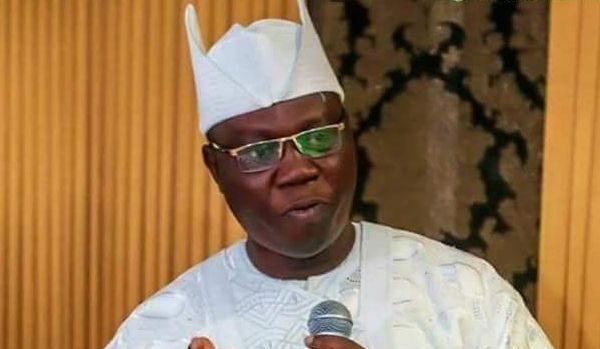 The Generalissimo of Yoruba land, Gani Adams, on Monday warned President Muhammadu Buhari that ignoring the advice from former President Olusegun Obasanjo on the security situation in Nigeria may be disastrous.

Buttressing this, Adams while speaking in his hometown in Arigidi Akoko in Ondo State, said that Obasanjo’s letter had stated the mind of Nigerians over the issue of insecurity in the country.

He maintained that Buhari will be inviting disaster if he ignores the counsel of Obasanjo on lasting solution to the crisis.

The Aare Ona Kakanfo of Yoruba land also carpeted Buhari for condemning people that criticize his government over insecurity, adding that the incessant cases of kidnappings, banditry and killings in the country should be a source of worry to any democratic leader.

He said the series of challenges militating against the country, particularly the issue of insecurity portends grave danger for the nation’s economy.

Noting that the death of Mrs. Funke Olakunri was a sad testimony to the country, Adams said Nigerian leaders must be united in their voices to tackle the daunting security challenges headlong.

“Let me say this for emphasis that in as much as I am not keen to bragging or blowing my trumpet, I have always had my reservations for whatever comes from former President Olusegun Obasanjo.”

“But I think his recent open letter to the President, Muhammadu Buhari speaks volume of the danger ahead and it really expressed the minds of Nigerians and the world at large.

“Don’t forget, I’ve always expressed my worries about insecurity and the senseless killings across the nation and southwest in particular.

“The gruesome murder of the late Mrs Funke Olakunrin, along Shagamu/Ore road was a sad testimony of the terrible situation of the country at the moment.

“In all these, former President Obasanjo raised issues about mobilisation for national unity, stability, security, cooperation, development, growth and progress.

“He said government should open up discussion, debate and dialogue as part of consultation at different levels and the outcome of such deliberations should be collated to form inputs into a national conference.

“This, as far as I am concerned, is to help us come up with the solution that will effectively deal with the issues and lead to development, growth, and progress,” he said.

Adams also asked the President to implement the recommendations of the 2014 National Conference.

He noted that the reports contained in the conference have captured the issues confronting the country with their solutions.

“I think this is the only solution that will give us a wholesome society and enhanced living standard and livelihood in an inclusive and shared society.

“We need unity of purpose and nationally accepted strategic roadmap that will not change with whims and caprices of any government.

“It must be owned by the citizens, people’s policy and strategy implemented by the government no matter its colour and leaning,” he said.