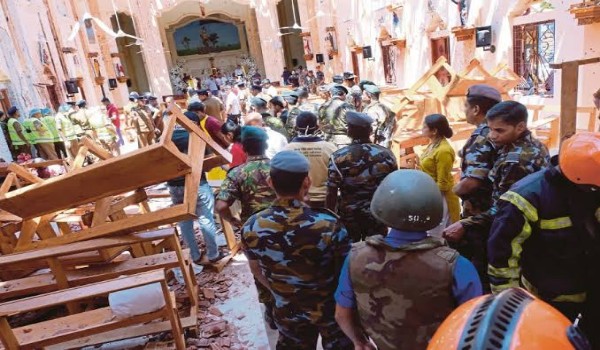 Islamic State has claimed responsibility for the coordinated attacks in Sri Lanka. Three Sri Lankan churches and several hotels were hit by explosions on Easter Sunday.

The blasts which targeted four hotels, including the Shangri-La, Kingsbury and the Cinnamon Grand in the capital Colombo killing 310 people, in the worst attack since the end of the civil war a decade ago.

IS news agency, Amaq, released a bulletin on Tuesday stating that the attacks were carried out by “Islamic State fighters.”

New York times reports that the statement was shared on the group’s chat rooms on the app Telegram, also said that the bombings targeted Christians as well as citizens of countries belonging to the coalition fighting the Islamic State, also known as ISIS.

In a later news release, the Islamic State identified the seven suicide bombers by their noms de guerre, and specified which of them had gone to each of the churches that was bombed during what it called “the infidel holiday.”

Also, Amaq published a video showing eight men — apparently the Sri Lanka attackers — pledging allegiance to Abu Bakr al-Baghdadi, the leader of ISIS whom they called “emir of the believers.” They hold their hands up, index fingers pointed skyward, in a gesture that the Islamic State has adopted to refer to belief in one God.