Home » Politics » KOGI GOVERNORSHIP: Melaye is the least of my worries – Bello 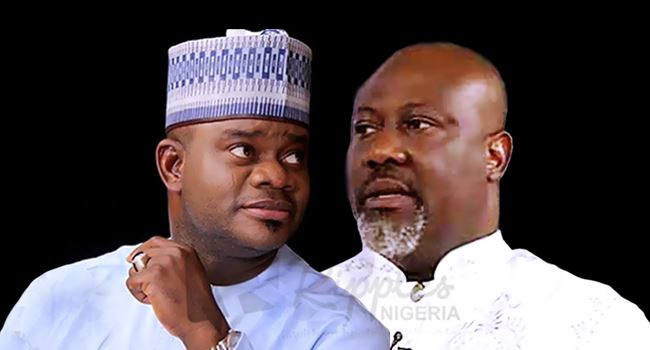 Ahead of his second term bid in office, Kogi state governor, Yahaya Bello, has said that Senator Dino Melaye’s governorship ambition is the least of his worries.

Bello who spoke with newsmen at the Kebbi governor’s lodge in the Asokoro area of Abuja shortly after the Progressive Governors Forum on Sunday said Melaye has no quality that can make him dread his candidacy in the governorship contest.

He reiterated confidence in emerging winner of the forthcoming governorship election in the state saying what people should be bothered about is the margin of victory between him and his opponents.

According to Bello, Melaye who is the Senator representing Kogi West must be prepared to pass the eye of the needle.

“Anytime you talk, we should talk of somebody that is good. Apart from that person, you are talking of, let him justify the mandate given to him by showing his people what he has done. For him to come and challenge me means that he is ready to pass through the eye of the needle”, he said.

Read also: EDO: I have no rift with Oshiomhole, says Obaseki

On the possibility of getting the party ticket, Bello boasted that the ticket has no where to go except him. “Where will the ticket go outside myself?”

He added, “In Kogi state, we know the election is coming up and of course, a lot of people will come out for the challenge. But the reality is that we are on ground. From within the party to the general election, we are not just talking of victory, we ‘re talking of the margin of the victory of APC over any other party that will come next because of what we have been able to do in the state delivering on all our promises.

“You are going to see election like never before. Kogi election is going to be as smooth as anything and we are very confident of victory”, he said.