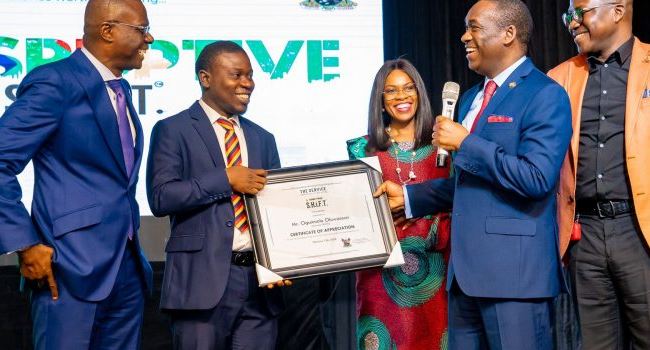 The recognition, which was part of the highlights of the launch of a knowledge sharing platform for public servants, took place on Wednesday, February 12, at the Adeyemi Bero Auditorium, Alausa, Ikeja, and was chaired by Governor Babajide Sanwo-Olu.

The App, AlausaSabi, is built with an intent to automate the provision of information “on anything and everything anyone needs to know about the Lagos State Public Service” while exploring the App by users.

This recognition of Oluwaseun by the State Governor comes at a time the state is being criticised as hostile to tech investors, the aftermath reaction of the recent ban policy by the government on the operations of okada in some major parts of the state.

Although, this is not the first display of romance with tech by the state, past records show how Lagos State has been pioneering and supporting tech communities and initiatives.

Oluwaseun, at the event, was presented a certificate of appreciation by the state and was reportedly “double-promoted” by the Governor, thus, moving from a level 8 officer to 10.

In the last 3 months alone, Lagos has invested N250 million in tech empowerment opportunities when (in December) it revealed plans to empower entrepreneurs and innovators in the technology space.

Lagos, hence, might be on its way to becoming a smart city if more of these initiatives are encouraged and supported by the state.