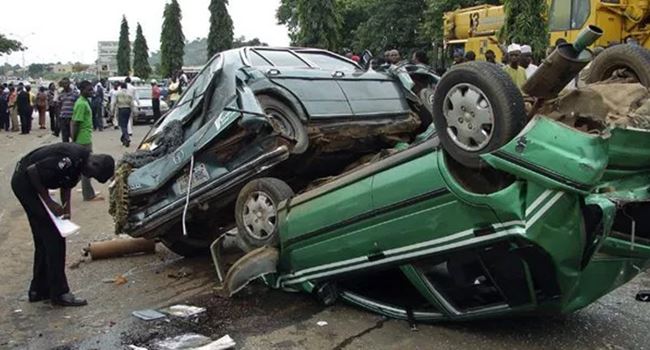 An accident involving a Toyota Camry, Volkswagen Bora and two Bajaj motorcycles has claimed the lives of two people around Paramount FM on Abeokuta-Sagamu Expressway.

According to him, the driver of the Toyota camry lost control due to over speeding and swerved into the incoming Bora vehicle and two motorcycles on the other lane.

“The driver of the Camry ran away with injuries sustained before our rescue team arrived the scene of the accident.

‘’The two dead victims were the motorcycle riders.

“The driver of the Bora car, the passenger with him as well as the woman on board one of the motorcycles, all had broken legs,’’ he said.

Akinbiyi added that the two dead bodies were deposited at the State Hospital, Ijaye, Abeokuta, while those that sustained injuries were also taken to the same hospital for treatment.

In a similar incident, five travellers on Abeokuta – Sagamu Expressway were killed in an auto accident not less than two weeks ago on a Sunday afternoon.

The accident occurred at Olorunshogo village on Kobape-Siun axis, along the expressway when a Nissan Primera suddenly lost control and rammed into a stationary Volvo truck from behind.

Commander Akinbiyi who confirmed the incident said the bodies of victims had been deposited at the General hospital, Ijaye, Abeokuta, the state capital.

80 arrested in Kano for breaking fast during Ramadan