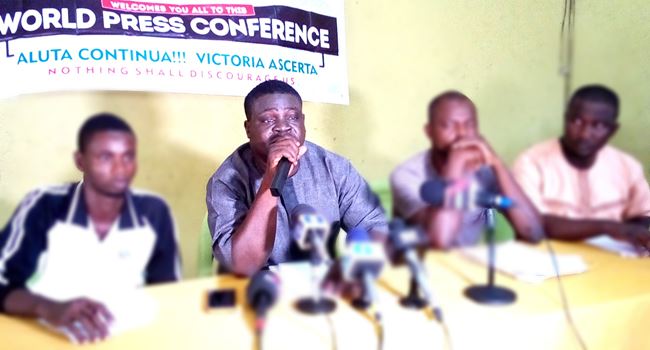 Failure to do this, the association said they would unleash terror on herdsmen in the region.

In the statement, the students’ umbrella body also called on Northern leaders and governors to call “killer herdsmen to order or face the wrath of students in the South West region.”

“President Mohammadu Buhari should immediately proscribe the Miyetti Allah Castle Breeders Association of Nigeria (MACBAN) for shielding killer-Fulani herdsmen and promoting the wanton killings and destruction of property in the South West region.

“We have video evidence of Fulani herdsmen killing and maiming in the South West and we will no longer condone such dastardly acts on our people.

“If the activities of these marauding herdsmen in Yoruba land is not checked by the Federal Government, the Nigeria Police Force and other security agencies, we will unleash terror on Fulani herdsmen who are killing our people on a daily basis.

“We are declaring total war on the killer-herdsmen in the South West region. We can no longer fold our arms and watch these criminal elements continue to kill our people.

“We will no longer do nothing while these strangers destroy Yoruba land. We will fight them with everything we have.”

The students leaders also called on all the governors of the states in the South-West to rise up to the challenge of tackling the rampaging herdsmen head on.

According to them, students are being exposed to attacks by the herdsmen, who they said have turned campuses to grazing fields at Moshood Abiola Polytechnic (MAPOLY), Abeokuta and the Federal University of Agriculture, Abeokuta (FUNAAB).

“Of note is the recent Igagan incident, where Fulani herdsmen have dominated the community, perpetrating their heinous acts.

“We want to sound a note of warning to these killer herdsmen to desist from their persistent attacks on Yoruba land as nobody has a monopoly of violence.

“We are ready to match these attackers of Yoruba race with the same violence they have subjected us to.

“However, we want to enjoin our brothers and sisters to continue to maintain peace and calmness.

“We are for a united Nigeria and we continue to demonstrate the ‘Omoluabi’ and leadership traits we are known for in the South-West,” the statement added.