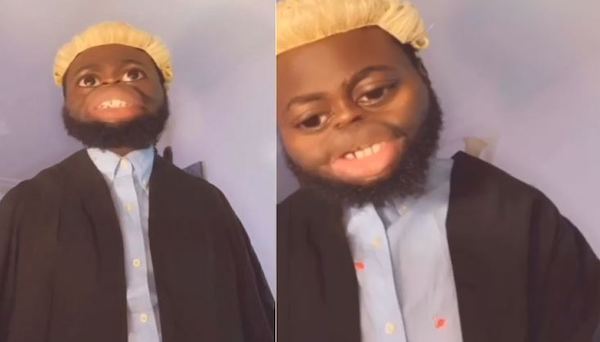 Nigerian comedy skit act, Lasisi Elenu has been bashed on Twitter by a legal practitioner, Habeeb Lawal,Esq, for his joke depicting lawyers in a court session.

In the video titled “The Law”, the comedy act was seen sarcastically standing before a judge to defend his ‘invisible’ client. He further asked viewers to tag lawyers to the post.

Mr Habeeb, who stated he was a representative of the Nigerian Bar Association (NBA), fumed over the portrayal of his colleagues in the skit and the comedian’s disregard for their garments which he stated were the wig, bip and gown.

“Dear @lasisielenu, We’ve been tagged! We beg to use you as a point of reference to all other comedians.

“Lawyers have awesome sense of humour, as such we enjoy your jokes & appreciate the creativity.

“However, if you must represent our profession in your works, kindly ensure you properly adorn the wig, bip & gown,”

The lawyer further threatened to take action against the comedian if the warnings were neglected.

“We acknowledge your right of expression, but NOTE that we also reserve the rights to take all NECESSARY steps to guide against the ridicule of our noble profession and @NigBarAssoc shall not hesitate to exercise those rights.”

Mr Habeeb further provided a video guideline on how to make jokes about lawyers.