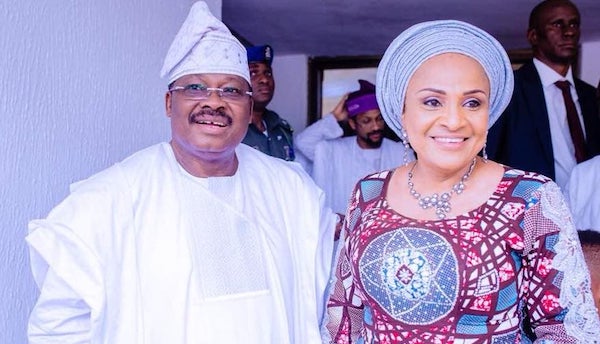 Mrs. Florence Ajimobi, the widow of the late former Governor of Oyo State, Abiola Ajimobi, on Sunday evening accused the state governor, Seyi Makinde of disrespecting her husband even in death.

Mrs. Ajimobi, who disclosed this when the Nigeria Governors’ Forum (NGF) delegation led by its chairman, Kayode Fayemi, paid a condolence visit to the family of the deceased at their Oluyole home in Ibadan, said governor Makinde did not call or paid her a visit since the death of the All Progressives Congress (APC) chieftain last Thursday.

She advised the governor to avoid playing politics with the death of her husband.

Ajimobi, who died at a Lagos hospital on Thursday, was buried at his Oluyole home on Sunday.

Mrs. Ajimobi said: “I read in the newspapers a few days ago that the governor of Oyo State, Engr. Seyi Makinde, claimed that he called me and I didn’t pick up. He never paid Ajimobi’s family a visit since my husband was admitted to hospital, neither has he sent anyone nor sent us a message.

“I don’t have his contact and I have never spoken to him. Even if he called me and I didn’t pick up because of my mourning state, he could have sent me a message.

“Ajimobi’s family is not competing with him in any way, we are all working for the growth, development, and progress of Oyo State, although our party might be different, we are working for the same goal.

“Do I need to send an official message to the governor to inform him about the death of my husband before he could send us a condolence message or pay us a condolence visit? It is not pleasant to hearings. What kind of politics are we playing?

“As a former chief public servant who had assiduously served this state, he deserved some honours and not a show of shame when he had gone to rest. He never planned to go this soon, he could be anybody as no one knows the next moment.”

Fayemi, who spoke on behalf of the governors, sympathized with the family and prayed for the repose of the ex-governor’s soul. Watch the video below: