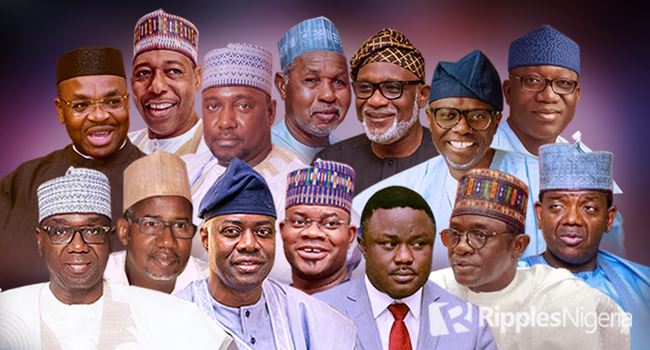 The performance of elected officials, especially Nigerian governors, has continued to form a critical task for the Editorial Board of Ripples Nigeria.

In May, we had focused on ten governors who were in their first term in office, examining their performance in the first year of their four-year tenure. In doing so, we retained our traditional ranking template of Top 5 and Bottom 5.

For the month of June, the Board has found no exceptional service delivery on the part of most governors across the country. Therefore, a verdict of unsatisfactory performance, characterized by fumbling and wobbling, is hereby passed on these helmsmen.

Consequently, we have settled for short takes on at least 15 Nigerian state governors whose performance left much to be desired.

Though we acknowledge a few isolated efforts, the activities of this select class have been largely drowned by the more pronounced incompetence which has continued to aggravate widespread discontent in the land.

The Ondo State Governor, Rotimi Akeredolu, in obvious contravention of the rights of his deputy, Agboola Ajayi, had him prevented from leaving the Government House by a team of policemen led by the state Commissioner of Police. It is believed that Akeredolu had instigated the move based on political disagreements with his deputy who was then being rumoured as planning to defect from the ruling All Progressives Congress (APC).

We are disturbed that Akeredolu further shunned democratic niceties and made matters worse by sacking all the aides of the deputy governor after his eventual defection, in an apparent move to punish the state’s number two citizen for abandoning APC.

The continued denial of the presence of the COVID-19 pandemic in Kogi State by Governor Yahaya Bello has confounded even the worst of skeptics in the land. This denial has become the past time of the governor despite confirmation of cases of the virus in the state by the Nigeria Centre for Disease Control (NCDC).

Apart from the consistent denial, Governor Bello has also continued to cast doubts on the reality of the pandemic in the country, claiming it was an artificial creation meant to drive fear and panic in the minds of the public. It is regrettable that because of this, the average man in the state continues to live in denial of the pandemic.

Lagos State Governor, Babajide Sanwo-Olu has variously been commended for the way he has handled the COVID-19 pandemic in the state. With testing ramped up, and current data from the NCDC indicating rising incidence, there are growing concerns that the government is losing the battle to enforce announced safety protocols.

Particularly worrisome are the activities of hoteliers, operators in the transport and entertainment sectors who have continued to operate in breach of COVID-19 protocols.

One of the major precautions governments all over the world had put in place for the control of the spread of COVID-19 is the ban of large assemblies. Perhaps, acting out of sheer sentiments, the Akwa Ibom State government in June announced the lifting of the ban on burials and wedding.

In directing the lifting of the ban in a state wide broadcast, Governor Emmanuel said he understood the nature of burials, underscoring the fact that adhering to safety protocols could be a herculean task. We are unimpressed that Udom would allow himself to be driven by emotions rather than reasoning.

Governor Aminu Masari of Katsina looks to be gradually losing his hold on the state, as bandits relentlessly attack communities and displace citizens, so much so that the governor within the month confessed that attacks by bandits, and not COVID-19, is the problem the state is facing.

We are concerned that Masari’s peace moves have not only come to nought but emboldened the bandits, leaving the governor helpless and seemingly without new ideas on what to do.

Niger State in North Central Nigeria is stuck between two evils; growing attacks by bandits and collapsed road infrastructures. Travelling within the state has for a while remained a nightmare for both residents and commuters, leaving them with untold hardship and at the mercy of criminals, who almost on daily basis attack and withdraw to the many bushes sprawling the large expanse of land in the state.

We are worried that Governor Sani Bello seems unable to muster the necessary will power to address these twin evils, leaving the state largely without the needed presence of governance that addresses the immediate needs of the people.

Governor Kayode Fayemi appears to have allowed himself to be distracted by the intractable war with major stakeholders of the APC in the state, which has forced him to literally abandon governance while complaints of under performance mount.

Like many keen watchers of the Ekiti political space, we are concerned that there is motion but without movement.

Governor Seyi Makinde of Oyo State, in what turned out to be a not-so-well thought out action, ordered the reopening of schools on the state for the 21st of June, though critical indicators suggested that such would amount to a costly gamble given the increasing rate of COVID-19 infections.

The governor, perhaps, after realising the folly in such a move cancelled the reopening of the schools but the import of the initial action is not lost on us. We are disappointed at the lack of critical thinking that led Makinde into eating humble pie.

Governor Bala Mohammed of Bauchi State has continued to be bogged down with the burden of corruption tag placed on him by his now suspended prosecution in a court of law by the Economic and Financial Crimes Commission (EFCC).

The recent seizure of a property in the Wuye District of the Federal Capital Territory (FCT) by the Independent Corrupt Practices and other related offences Commission (ICPC), has increased Mohammed’s moral burden as a governor. We are afraid that the former FCT minister might be tempted to deploy resources of the state in defending himself, just as the state government has been trying to exonerate him from any wrongdoing in this particular ICPC saga.

We acknowledge that Governor Ben Ayade of Cross River State was one of the state chief executives known to have approached the COVID-19 pandemic with some seriousness. Ayade, however, in a bid to maintain an imaginary clean record, veered off the rack, choosing instead to frustrate the activities of the NCDC.

While the duo of Ayade and his Health Commissioner chose to grandstand, the University of Calabar Teaching Hospital (UCTH) made bold to say that five cases had been recorded.

We hold Ayade responsible for the mismanagement of the COVID-19 challenge which has now caused the state chapter of the Nigeria Medical Association (NMA) to declare an indefinite strike, claiming that the attitude of the state government to the pandemic was putting the lives of their members and that of the general public in danger.

Governor Aminu Tambuwal of Sokoto State made headlines in the month of June when he challenged the National Bureau of Statistics (NBS) rating of his state as one of the poorest in the country. Tambuwal disagreed with the statistical agency, asking for a proof and explanation of the indices used in arriving at their conclusion.

We are tempted to describe Tambuwal’s reaction as playing the ostrich. A more honourable response would have been to acknowledge the findings as a tool for strategic decision making. Indeed, it represents a mark of failure that he had not been able to improve on the ranking of Sokoto state after five years in office, and also refusing to take on the challenge that has been thrown at him.

Governor Babagana Zulum of Borno receives a mention among the fumbling and wobbling team in the month of June for ordering the reopening of three secondary schools in Bama, one of the most insecure regions in the state. It is our view that asking the schools to reopen immediately, amidst the spread of COVID-19 and the increasing wave of Boko Haram attacks, is less than thoughtful.

Though Govenror Zulum has been praised variously for his commitment to finding lasting peace in the state and his unique approach to governance, putting the lives of students in danger at this time is a low for him, especially at time when all schools in the country and several parts of the world are shut.

Governor Bello Matawalle of Zamfara State made headlines when he assumed office with his breakthrough in the management of the security situation in the state. The gains recorded initially seem to have been eroded with renewed constant attacks by bandits, leading to deaths and abduction of victims.

Though we commend his proactiveness in engaging the bandits, we, however, note that strategy of appeasement is not sustainable.

We are convinced that bandits, just like terrorists, are criminals without conscience and only moved by their inordinate appetite for terror and profit. Negotiating with them, as Matawalle has been doing, can only embolden them and present the government and people of the state as conquered subjects that must accede to their demands at all times.

Governor Abdulrahman Abdulrazaq of Kwara State appears to have been bitten by the bug of power and the misuse of it; just like most state governors in the country are known to have done in the past, treating local government administrations as conquered territories that must have their loyalists at the helm.

Apparently not satisfied with the fact that the LG administration in the state had members of the Peoples Democratic Party (PDP), Governor Abdulrazaq sent both the chairmen and the councillors on suspension in June 2019, immediately after coming into office. The suspension was renewed for another six months in December 2019, and again in June 2020, renewed for another six months.

By his action, Governor Abdulrazaq has increasingly exhibited intolerance and undemocratic tendencies, two features capable of driving the state towards authoritarianism.

In June, the Yobe State Governor, Mai Mala Buni, accepted a side appointment as Chairman of APC Caretaker Committee. He is expected to hold the office for six months. Given current realities, the new assignment would be time consuming and would require the Governor to dedicate time in running the party. But we dare ask, at whose expense?

Governor Buni, we reckon, was not elected to run APC but to govern Yobe State. How best would he be able to discharge his primary duty to the people of the state with the current exuberance of party politics is, for us, a source of worry.