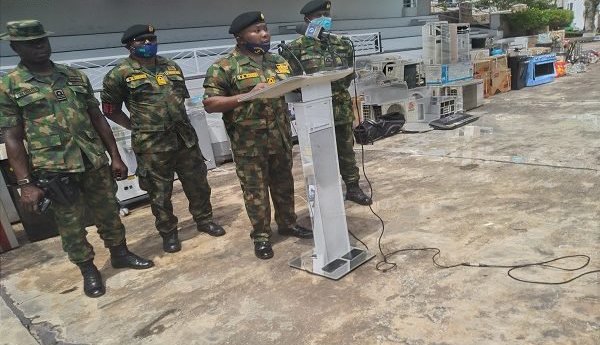 The Nigerian Navy has arrested 41 suspects over their alleged involvement in looting and attacks on innocent citizens during the #EndSARS protests in Lagos.

The Commander, NNS BEECROFT, Cdr. Ibrahim Shettima, disclosed this to journalists on Friday in Lagos.

Shettima, who was represented at the forum by the Acting Executive Officer of NNS BEECROFT, Commander Andy Zidon, said the recovered items include vehicles, household appliances, industrial equipment, foodstuff, clothes, jewellery and bicycles.

He said: “In the course of the operation, 41 individuals were arrested for partaking in various criminal acts, including looting and attacks on innocent citizens of Lagos State.

“They have been handed over to the Nigerian Police today (Friday). Furthermore, a large number of looted items were recovered at various locations across our area of operations and evacuated to the Base.

The commander said the NNS BEECROFT was working with the Lagos State government in order to handover the items to the rightful owners.

“In fact, a large truck and mini-bus were also discovered loaded with looted items about to be taken out of the state,” Shettima added.

He said during the period of the unrest, the Base conducted at least 200 active patrols and responded to about 50 distress calls from citizens and organisations.

“The Nigerian Navy responded to the crisis in an effective and timely manner to help ensure the return of normalcy within its area of operations.

“This operation was conducted under the Lagos State Security architecture code-named OP MESA, which designates Apapa, Orile, Ijora, Costain, Surulere, Mile 12 and Amukoko as the AOR for the Nigerian Navy,” the commander concluded.