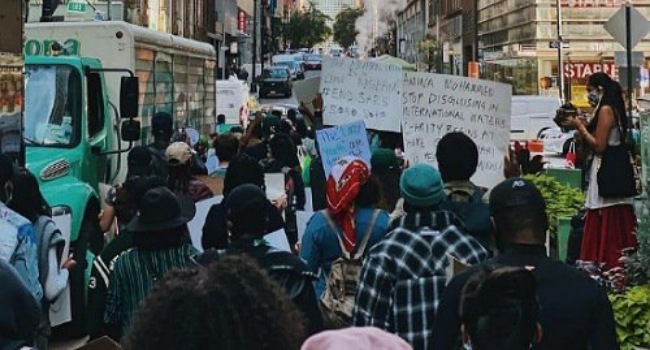 Nigerian residents in New York, USA have joined the now global #EndSars protests against police brutality in Nigeria as scores of nationals poured into the streets of ‘The Big Apple’.

Many were pictured carrying placards demanding the end of SARS as well as a reform of the Nigerian Police Force.

Reports say protesters also marched on the street of Manhattan to the United Nations house where they demanded the Deputy UN Secretary-General, Amina Mohammed, to speak out condemning police brutality in Nigeria.

Some Nigerians in France on Friday joined the #EndSARS protest to demand an end to police brutality at the Nigerian Embassy situated at the Victor Hugo area of Paris, capital of France.

The #EndSARS protests are still ongoing despite the police announcing the disbandment of the unit and the announcement of the formation of the Special Weapons and Tactics Team (SWAT).