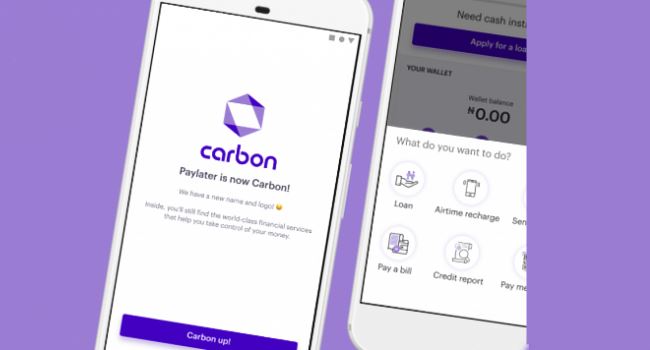 Money lender Carbon, formerly operating as Paylater, has built its service App in a bid to extend its offering to waiting iOS users.

This development is coming on the heels of the company’s recent expansion to Kenya in the last quarter of 2019.

With the new App, Carbon becomes the first money lender firm in Africa to build for iOS users. While this will compliment its list of android-only users, this is Carbon breaking into another market of about 9 million users across its operating countries in Africa.

According to Carbon, its team of software engineers had to crack a tough nut developing the iOS App given the high risk involved when integrating into Apple domains which is both technically challenging and financially intensive.

Henry Uku, the Growth Lead at Carbon, confirmed this when he said Carbon’s 4 year experience in the use of technology to run a money lending business has helped shaped its strategies to build products that can manage risk more efficiently.

“With our learnings over the last 4 years, we’ve built out one of the most sophisticated lending algorithms on the continent that allows us to be platform-agnostic and assess risk a lot more efficiently,” the Product Lead stated.

Beyond this, however, analysts have noted that Carbon is playing its cards to be more competitive, tapping into supposedly dormant spaces and market gaps where other players neglected.

According to the world’s leading statistics portal, Statista, Kenya, with a mobile internet population of 46.87 million users, has about 3.83% iOS users. This amounts to about 1.7 million Apple phone users that Carbon is targeting with its new iOS App.

On the other hand, Nigeria, with a mobile internet population of 123.49 million users, has about 6.07% iOS users. This also amounts to roughly 7.4 million Apple phone users.

The summation, from both countries, is good business for the Carbon company, especially for the fact that iOS users are mostly high earners and heavy spenders who are perfect markets personnel for a loan company as Carbon.

Will Carbon be left to dominate this space by other money lending Fintech players such as Renmoney, Kwikmoney and Zedvance? Will they equally build their iOS Apps to divide market shares soon? What will others do differently to increase patronage? Many others questions on the mind of analysts.

Going first, like what Carbon has done, is good in tech and business, but value sustainability and quality service are the real game changers. Can Carbon hold this mantle forever?