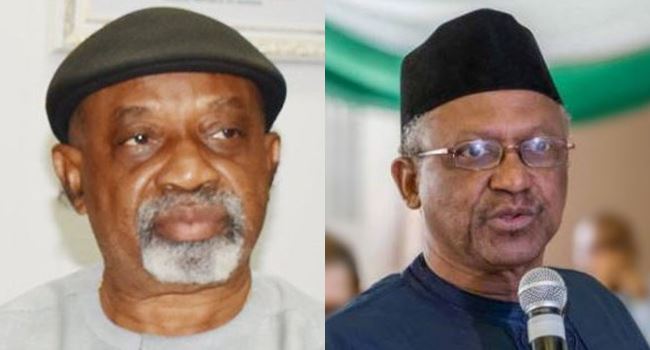 The Nigerian Medical Association (NMA) has accused the Minister for Labour and Employment, Dr Chris Ngige and the Minister for Health, Dr Osagie Ehanire, of sabotaging the efforts of President Muhammadu Buhari in fixing the country’s ailing health sector.

The association maintained that the two ministers would further, harm the health sector if retained in the system and urged them to resign their positions if they were tired or the job was too difficult for them to handle.

Speaking during a programme on Channels Television on Monday, NMA President, Prof Innocent Ujah, said the association in 1985 had called the attention of the government that hospitals in the country had become mere consulting clinics, noting that it was sad that a lot of government functionaries were misinforming the system.

He stated his belief that some government officials were sabotaging the efforts of the President, saying, “otherwise, how can we be going round in circles like this?”

“These are things that have been on the drawing board for some time; agreements were signed and nothing happens once the industrial action is suspended. For the minister of Labour to say to the effect that Nigerian doctors are being paid so much money, and that in America and the United Kingdom, you have to pay to do your residency, I am very disappointed.

“That is a complete lie, and indeed it is a hate speech. I do not expect a very respected minister of Labour, former governor, and a former senator to make such statement because the statement would appear to be law when he makes them.

“By and large, I believe there are some people who want to sabotage the efforts of Mr President. For such people, it is either they are tired or they are unwilling. The best way to respond to those issues is to probably quit because they are not telling the truth,” he said.

Speaking further, he said the level of rot in the health system was so bad and believed that the government wouldn’t be quiet but respond appropriately to the problems if it truly bothered them.

“There was COVID-19, and doctors and other health workers went to the field to prosecute this war. The issue of hazard allowance came up and it was treated with levity, except for the intervention of the Honorable Speaker of the House of Representatives. This money that was pittance was paid for just three months, and that was all. Meanwhile, people are fighting to contain the covid-19 pandemic.

“As I am talking to you now, since June, nobody (doctors or health workers) has received any Hazard Allowance, and this is the period of war as far as health is concerned. My statement is that the functionaries of government are very unserious.

“House officers have been working since January; is there any reason why they should not be paid? These are people who work for 24 hours. Why should Nigerian doctors and other health workers not be covered with life insurance especially during the period of the pandemic?

“Four weeks ago, I advised the Federal Ministry of Health and Labour to address the issues of the resident doctors. We have been going round to find ways to resolve this without anybody knowing, and going behind the scenes – discussing, consulting and negotiating, but the truth is that it doesn’t appear that the functionaries of government are prepared to do anything. Otherwise, we shouldn’t come to this mess.

“I believe that it should have been settled a long time ago. Why is it that the functionaries of government – Minister of Labour and Employment and the Minister of Health kept quiet until there was a strike action? Why should doctors not be paid? This is just purely administrative lapses,” he added.