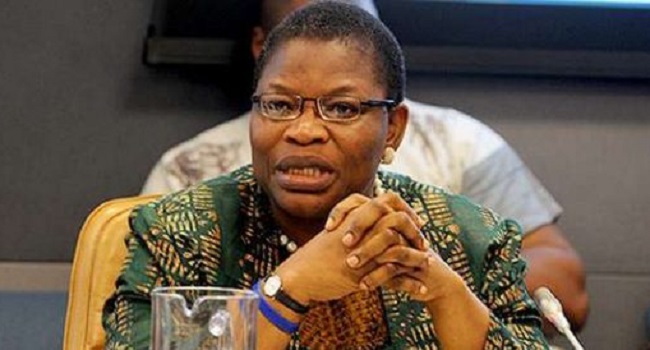 A former Minister of Education, Oby Ezekwesili has suggested that the President Muhammadu Buhari led Federal Government has decided to punish Nigerians with forex restriction on milk and diary products for rejecting his administration’s RUGA project.

It will be recalled that the Governor of the Central Bank of Nigeria, CBN, Godwin Emefiele had that the apex bank will place a ban on the importation of milk and other dairy products into the country.

Emefiele stated this at the end of the bi-monthly Monetary Policy Committee (MPC) meeting in Abuja on Tuesday.

Reacting on Friday through her Twitter handle, Ezekwesili described the CBN’s decision as a policy borne out of vindictiveness.

She said: “Nothing more perverse of Political Leaders and Policy Makers as Policies borne out of Vindictiveness.

”It appears from what the CBN said on the MilkBanPolicy that it is a case of “You folks rejected RUGA, here is your punishment.” What a BIG SHAME that would be.

“Often I read or hear Nigerians say: “We have good policies/laws. Our problem is lack of implementation”.

Read also: #BBOG demands to know whether Leah Sharibu is dead or alive

“How wrong they are! The bane of our failure to achieve sustained economic growth that reduced Poverty in other countries is actually, BAD…..dangerous Policies/Laws.

”When MilkBan Policy happens, to avoid Scarcity which Prices Milk up and out of the reach of the Poor, Nigeria needs to immediately triple current production of milk.

“Nigeria has the highest number of children less than 5 years with chronic malnutrition (stunting or low height-for-age) in sub-Saharan Africa at more than 11.7 million, according to the most recent Demographic and Health Survey (DHS) (National Population Commission)”

“Child Poverty is even worst in a country that holds the ignoble record of being the World’s Capital of Extremely Poor People; our President should be fleeing from Policies that escalate Poverty.

“The CBN’s MilkBan Policy is dangerous. Dangerous for the Poor.”