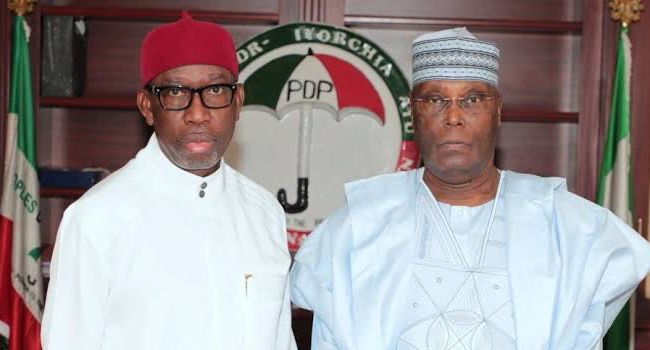 The youth wing of the apex Igbo socio-cultural group, Ohanaeze Ndigbo, has warned the 2023 presidential flag bearer of the Peoples Democratic Party (PDP), Atiku Abubakar, against succumbing to pressure from politicians loyal to Rivers State Governor, Nyesom Wike, by dropping his preferred running mate, Governor Ifeanyi Okowa of Delta State, as he stands the risk of losing votes from the South-East.

The Ohanaeze Ndigbo Youth Council Worldwide (OYC), was reacting to speculations that Atiku and the PDP was contemplating dropping Okowa and replacing him with Wike to pacify a section of party stalwarts.

There have also been unconfirmed reports that Wike’s loyalists are said to be demanding that Atiku drops Okowa and pick Wike instead as the only condition for peace to return to the party.

But in a statement on Tuesday jointly signed by the National President of OYC, Mazi Okwu Nnabuike and the Secretary-General, Comrade Obinna Achionye, the group cautioned Atiku against dropping Okowa, saying such a move would be to the detriment of the party and Atiku’s ambition of becoming president.

Part of the statement as seen by Ripples Nigeria said the South-East would not accept to “lose out completely in the scheme of things, having lost the opportunity to produce the presidential candidate of either the PDP or the All Progressives Congress (APC).

“There is no need to repeat that we expected both the PDP and the APC to zone their presidential tickets to the South-East, but that did not happen.

“Though this has been overtaken by events, the only consolation we have is the choice of Governor Ifeanyi Okowa as running mate to Alhaji Atiku Abubakar, considering that Okowa is a true Igbo son.

“Having said this, how could anyone wake up and think of replacing Okowa with Wike? As much as we know that Atiku reserves the right to choose whoever he wills as his running mate, we also have the right to vote according to our desire.

“And that desire is clear- that the PDP would not get one vote from Igbo land should they field Wike, because this is a man who disowned Ndigbo. He said he is not one of us and this is payback time, we also do not know him.

“Should the PDP make the mistake of pairing Wike with Atiku, the PDP will be roundly rejected during the presidential election,” the Ohanaeze youths warned.