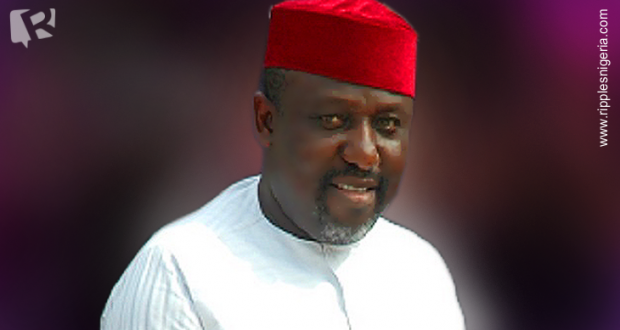 Former governor of Imo State, Dr Ikedi Ohakim has again attacked the incumbent governor of the state, Rochas Okorocha over salaries owed judges in the state.

The former governor noted that “Government is an oracle and should not be run by deceit, like what is going on in Imo State under Governor (Rochas) Okorocha”.

Ohakim in a statement by his Chief Press Secretary, Collins Ughalaa, lamented that the state government is “playing on semantics to deceive the gullible and absolve themselves of the blame of owing Judges and the responsibility of paying them”.

Recall that Ohakim had earlier raised the alarm that the Imo state government in the state is owing judges in the state about 16 months salary arrears, and threatened to lead a protest against the government if it failed to pay the judges by March 2018.

The Imo state branch of the Nigerian Bar Association (NBA) in a statement signed by its Chairman, Bar L.U.N Nwakaeti, has also cried out over the salaries owed the judges in the state and called on the government to pay up.

However, responding, Chief Press Secretary to the Governor, Mr. Sam Onwuemeodo stated, that “the Salary of Judges is paid by the National Judicial Council (NJC) and not the State Government”.

Onwuemeodo further noted that the NBA avoided the issue of who pays judges’ salaries, but chose to wrongly attack the state government.

He suggested that the NBA state chairman might be a card-carrying member of an opposition party, and is “using the Association to play selfish and disdainful politics”.

Responding to Ohakim’s accusations, Onwuemeodo also said that “If after being governor of the state for four years, the former governor didn’t know that the state government does not pay Judges’ Salary then something must have gone wrong somewhere and it is quite unfortunate”.

According to him, If the NJC handles the salary of Judges, then, the former governor was either distributing falsehood or has become overwhelmed by Governor Okorocha’s achievements that he didn’t know what to say again against the governor and his administration than to resort to jokes”.

Responding, Ohakim on Saturday night, said “We had expected that the intervention from the NBA would make the Governor sober and act accordingly, but characteristically they are playing on semantics to deceive the gullible and absolve themselves of the blame of owing Judges and the responsibility of paying them.
“Government is an oracle and should not be run by deceit, like what is going on in Imo State under Governor Okorocha.

“It is absurd that the Imo State Government seems not to know what salary, remuneration or emolument means. We are not surprised therefore that the civil servants in the state and pensioners have continued to suffer all kinds of maltreatment due to clear misconception of what the civil service is and what their salaries are.

“If Okorocha has any corporate environment experience he would have known that the worker’s pay slip clearly states the components of his salary, emolument or remuneration. They are not distinguishable. Otherwise, we would ask Governor Okorocha to tell the public how Imo State civil servants are paid, whether their salaries are different from the allowances, and whether they are paid separately.

“It is a shame that the Okorocha government does not understand what primary school pupils already know, that allowances are portions, parts or components of the salary, and that Basic Salary and Allowances make the whole sum called Salary, even when the NBA went the extra mile to explain it in elementary terms by naming the specifics”.

He further stated that “It is absurd, therefore, that in the light of the truth and the NBA intervention, instead of being remorseful and apologizing to Imo people and taking quick actions to pay the Judges, especially when the money has been released from the Consolidated Revenue Fund, Governor Okorocha is living larger than life and behaving like a god and drawing the Honourable Judges and the sacred temple of Justice to the mud.

“It is equally absurd that the state government said it would consult its record to confirm whether it owes the Judges or not, even though the NBA had dragged the Governor to the Industrial Court 6 months ago, and government lawyer had entered appearance with a preliminary objection.

“To exhibit the level of ignorance of not knowing what constitute the salary of a worker or to try to play on semantics is shameful, sheer mischief and playing to the gallery.

“Okorocha is not the first Governor of Imo State and he is not the only one that knows how the Judges are paid, and what constitute their salary. The Judges perform very critical functions not only for the survival and growth of democracy but also for the peace and stability of the society, and they deserve to be paid”.

According to him, “Imo Judges do not deserve to go through the pains of going to the court to get their emolument paid to them. A worker deserves his pay and it is wicked to withhold any worker’s salary under any guise”.

2019: Buhari, politicians above 60 are burdens, mustn’t be elected –Catholic Bishop