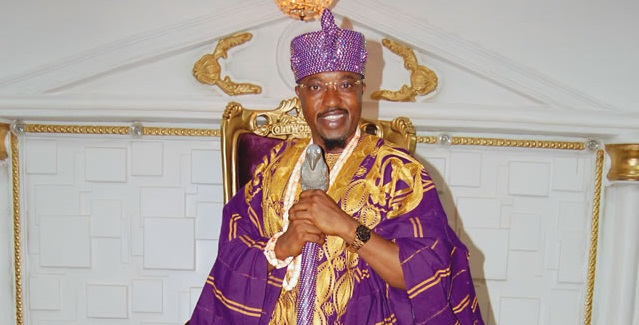 The Oluwo of Iwo, Abdulrosheed Adewale Akanbi, has apologised to the victims of slave trade in Nigeria for the role played by traditional rulers who facilitated the sale of their their subjects to foreign buyers.

He regretted that the traditional institution was involved in the selling of blacks to slavery for gifts.

The lamented the mistakes of his ancestors which caused lasting pain and stigmatisation of the victims till date.

In a statement issued by his press secretary, Alli Ibraheem, on Thursday, the monarch said his apology was to establish the damage done by slavery, in order to make progress, adding that it was time Nigerian children were told of the roles of the various monarchies in slavery, which witnessed innocent blacks sold by their African brothers for peanuts.

“I regret the involvement of the traditional institution in slavery,” the Oluwo said.

“Monarchs are one of the stakeholders that promoted slavery. We sold our children for a wall clock, tobacco, alcohol, guns, glass cup, wine, necklace, food plate, sweet and other unmerited peanuts such that, today, many Africans are permanently lost to suffer the stigmatization and unfair treatment till date.

“I take the bull by the horns to apologise for the role kingship played in slave trading because of material life. Many black Americans are yet to recover from the wound of slavery.

“I`m apologising to the accidental blacks in Cuba, Brazil, Caribbean, America and other parts of the world. I want the victims to acknowledge our regret for the past and so we can move forward.

“White men never forced us to sell our children as slaves. Our fathers voluntarily released their children on excitement for peanut. Then, there was no means of payment. Humans were offered in exchange for glittering material gifts.

“Such ignorance shouldn’t have survived without monarchs consent, who by then were the heads. We owe the past and the present an apology. I’m leading in tendering that.”

Read also: Okorocha, Ohakim argue over who is most hated by Imo people

The monarch also said there was need to exterminate corruption from the traditional institution, and by extension free the people from the mentality of modern slavery.

The monarch commended Buhari, who, on behalf of the federal government, apologised to the family of MKO Abiola, the winner of the annulled 1993 presidential election.

According to the Oluwo, admittance of past ills of the office is one of the qualities of a good father, and called for a collaborative effort of major stakeholders to curtail the modern slavery in Nigeria.

He also condemned the frequent reported cases of loss of lives at seas in Libya, and warned intending travellers to be wary of traders.

Akanbi called for the cooperation of the blacks to completely terminate all forms of slavery, tasking the federal government to enact strict penalty against such practices.

Some Igbos claiming marginalization by Buhari ‘just hate’ him— Keyamo