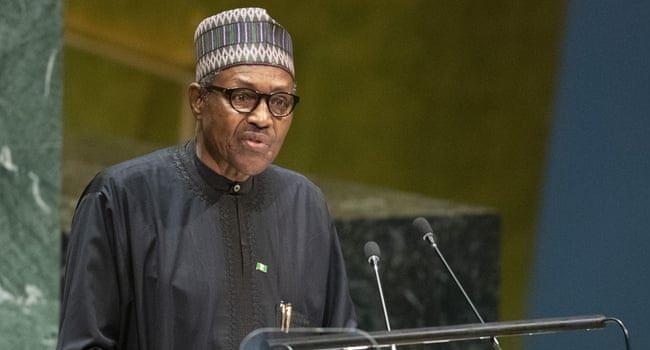 It was not surprising that the Nigerian Diaspora community would gather in New York City at the 76th session of the UN General Assembly to protest the reign of terror under President Muhammadu Buhari. What is deeply surprising is that the agents of the Nigerian government from the homeland would attempt to counter the truth by storming the same venue to launder millions of dollars on foreign imposters who were recruited to create the false impression that all is well with the African country. This shameless approach by the emissaries of Nigerian government only goes to show that President Muhammadu Buhari is an irredeemable zombie.

Agreed, sense is no more common these days, but recent events ought to have been able to alert the president that his government no longer has credibility at the international scene. Even a dumbo could have reasoned that the backhand banning of Buhari by Twitter has a ring to it. One must also not be a genius to discern the timing of the recent outright refusal by the U.S. government to sell arms to Nigeria. Follow these facts with the freefall of naira against major world currencies. Even a buffoon could recognize there and then that Buhari’s ongoing war against the Nigerian people is not being decided at the Aso Rock.

The gist, if it is not already palpable, is that while the Buhari Bribery train is designed to massage his montage of propaganda in Nigeria, it would always crash abroad. The days are gone when the Nigerian government can preach justice abroad, while promoting injustice at home. The days are gone when a clique could assume power in Nigeria, dictate as it pleases, and assume the world would follow. The days are far gone when the world relied solely on the official mouthpiece of the Nigerian government or the false testimonies of its corrupt agents. While fronting Nigeria’s foreign delegations with deep cocktail of Igbo and Yoruba colors can be superficially strategic, these government toadies can only talk and go back home.

The inconvenient truth is that Nigeria now boasts of millions of independent and trustworthy Nigerians in the Diaspora who function as a Shadow Government. The members are strategically entrenched in all the nooks and crannies of the world, and who are bound to tell it as it is. The members are formidable and have earned the trust of foreign governments. They are profoundly influential at every seat of world power and every seat of state and city governments.

Ironically, most of them are the direct victims of the injustice in the homeland. They belong to the community of highly qualified Nigerian citizens who are deemed unworthy at home but have found grace in the foreign land. They have become the Nigerian Biblical Josephs.
Today, these Nigerian Josephs have come to dictate the content and character of the nation’s foreign exchange, foreign trade, foreign investment, the media, as well as other socio-economic relationships. Common sense dictates that the same Josephs are the leading block contributors to the yearly amount of foreign money remitted to Nigeria, which is interestingly more than the national budget. Common sense dictates that as they go, so goes the national image and much more.

Nothing highlights the impact of these Nigerian Josephs more than their role in the current wave of Nigerian secessionist movements on the international scene. Recall that rather than exploring dialogue, as Buhari has always advocated in the case of similar situation in Palestine, his regime chooses brute force on the Biafran and Yoruba Nation activists. The regime even goes further to launder millions of dollars worldwide in a futile attempt to brand the Biafran activists as terrorists. But the Nigerian Josephs know better. And the world knows to follow.

It is not surprising, therefore, that the Nigerian group, besides Boko Haram, that came to be recognised worldwide as terrorists are the “foreign” Fulani herdsmen, the very group that President Buhari curdles. What is more? There were more flags belonging to the Yoruba Nation agitators and the Biafran “terrorists” than the national flags of Nigeria at the just concluded 76th session of the UN General Assembly. Thus, if propaganda and draconian threats—like his 2021 independence speech—must remain the solution to the Nigerian leadership crisis, someone ought to tell General Buhari that he is fighting a losing battle.

The true solution is common sense. Nigeria must not remain a fool at 61! There are open wounds that must be addressed and dressed. As the Sultan of Sokoto, Muhammad Sa’ad Abubakar III, stated at the earlier stage of the secessionist crisis, “A lot of things were done in the past by some people with impunity and nothing was done.” The Sultan appealed that statesmen across Nigeria “should help the country by championing the dialogue.” This goes without saying that Muhammadu Buhari should lead by example. He needs to embody what he has always preaches at the United Nations in case of the people of Palestine. This “is the question of justice, fairness, and equity in respect of the” Nigerian people. Anything else is being busy doing something close to nothing.

OPINION: Nigeria @ 61 and sixty one questions!