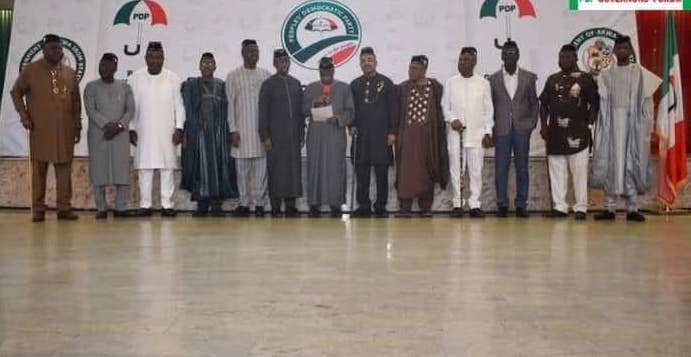 They lamented that over 80 percent of Nigeria’s appropriation had been spent on servicing the country’s over N36 trillion debt.

The governors, who stated these in a communiqué issued at the end of their meeting in Uyo, Akwa Ibom, warned that the current administration’s borrowings, if unchecked would lead Nigeria into bankruptcy.

According to them, the gains recorded by the country under ex-President Olusegun Obasanjo’s administration had been destroyed by the Buhari government through its borrowing for frivolous items.

They also tackled the government over its decision to ban Twitter in Nigeria.

The governors insisted that the ban on the microblogging platform would worsen the country’s unemployment crisis.

The state chief executives urged the President to review the ban “in national interest.”

The federal government had on June 4 suspended Twitter over what it described as its persistent use for activities that were capable of undermining Nigeria’s peaceful co-existence.

The communiqué read: “The PDP governors frowned at the rising and seemingly uncontrollable debt profile of Nigeria with over 80 percent of normal appropriation spent on debt servicing. All the gains of the PDP government under Chief Olusegun Obasanjo, GCFR, where Nigeria exited its foreign debt obligations had been destroyed.

“Borrowing for frivolous items such as funding the Nigerian Television Authority is scandalous. Money should only be borrowed for productive purposes as Nigeria’s current debt of over N36 trillion is becoming clearly unsustainable relative to our GDP. We should not saddle incoming generations with undue debt burden. The borrowing spree of the APC administration if unchecked, will certainly lead Nigeria into unavoidable bankruptcy.

“The meeting also examined the suspension of Twitter from operating in Nigeria, and condemned the personalised reasons given for the action.

“The mere ego of Mr. President is not enough for such a drastic action that deprives millions of Nigerians of such an affordable means of expression and communication. We hope that this is not a harbinger or early warning signs of descent into dictatorship.

“The meeting noted that social media regulation can only be done within the existing laws on the subject and should not be used as an attempt to punish or gag Nigerians from enjoying constitutionally guaranteed rights.

“Nigerian youths do not have adequate access to employment and a lot of Nigerians rely on Twitter for their livelihood, businesses and self-employment.

“This will further worsen Nigeria’s 33% unemployment rate which is the highest in the world, improve Nigerians ranking as the country with the second-highest poverty rate in the entire world, all of which happened under APC’s unfortunate stewardship.”

‘Show leadership to save Nigeria from collapse,’ Soyinka tells Buhari