Home » Politics » PDP to George: We play by the rules 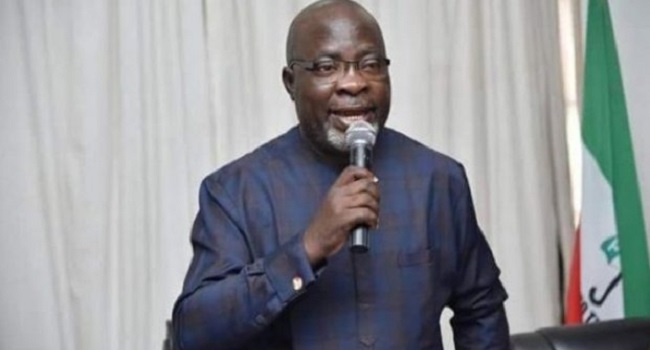 The Peoples Democratic Party (PDP) leadership insisted on Monday that the conduct of its affairs follows rules and procedures as provided in its constitution.

The party was reacting to a statement credited to its former Deputy National Chairman, South West, Chief Bode George, faulting the recent election of the party executive committee members in Lagos.

In a statement signed by its spokesman, Kola Ologbondiyan, the party noted that the Nigerian Air Force officer mixed up the issues, adding that the election was conducted credibly.

He said: “Perusing the said publication, it is easily decipherable by all informed members and critical stakeholders that Chief George mixed up issues.

“We believe he did this inadvertently, and unfortunately came to an erroneous conclusion, probably because he does not have the correct facts on the matter at hand.

“For the avoidance of doubt, the National Working Committee, NWC, wishes to state that the process that produced the elected Adedeji Doherty-led Lagos State Executive Committee followed all due process as stipulated by the PDP Constitution, the Party Guidelines, the Electoral Act; and without any whimsical interference by the national leadership.

“All actions taken by our members in Lagos in filling vacancies left either by resignations, defections and or death of occupants of those offices followed due process.

“It was a collective decision of the majority of our members in the state taken in a determination to reposition our party for the challenges ahead; a development which ought to be commended by well-meaning leaders and members of our party.

“Nigerians, especially, Lagosians, are aware that PDP members and her supporters are in the majority in the state but have wondered over the years why the fortunes of the party have not measured up to her numerical strength in successive general elections.

“No responsible and meaningful national party leadership and committed followership would allow a promising state chapter of her party, like the PDP, to be eternally polarized, balkanized and stifled, through continuous decimation of her membership due to unwarranted wrangling.

“The PDP, therefore, calls on all critical stakeholders and teeming members in Lagos state to close ranks, put aside all personal and parochial interests and work with the newly elected leadership to strengthen our party and provide Lagosians that credible platform to rescue their state from the strangulating and exploitative regime of the All Progressives Congress (APC).

“Indeed, Nigerians are looking up to our party for solutions and we must not fail them in getting the stage ready for the collective quest to retrieve the reins of governance from the anti-people, oppressive, incompetent, corrupt and vindictive APC at all levels.”