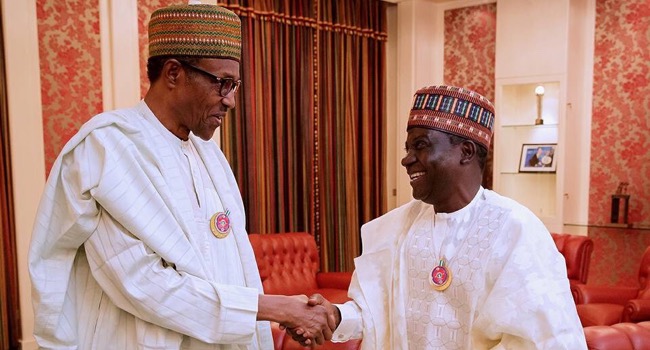 Ahead of Saturday’s supplementary election in Plateau, the state governor, Simon Lalong, has described the governorship poll in the state as good as concluded.

He said if the Independent National Electoral Commission (INEC) “like let them conduct the elections more than once, we will still win.”

The governor, who was not able to have a clear win during the March 9 governorship election in the state, stated this on Monday after a closed-door meeting with President Muhammadu Buhari at the Presidential Villa, Abuja.

Earlier, the governor of Bauchi, Mohammed Abubakar, who is trailing behind the Peoples Democratic Party (PDP) governorship candidate in the state, Mohammed Bala, had also visited the president, possibly to brief him of the situation of things ahead the supplementary poll.

The two governors belong to the ruling the All Progressives Congress (APC).

Their visit comes five days before Saturday’s supplementary governorship elections in their states as well as in Adamawa, Benue, Kano and Sokoto.

However, Lalong who spoke with State House correspondents after meeting with Buhari said his visit to the villa was the “usual briefing” because of his passion for peace in Plateau State and not about the election.

When asked if his visit as well as that of his colleague from Bauchi is borne out of the fear that Buhari’s decision not to interfere in the elections could lead to their electoral defeat, Lalong said:

“How can I be panicky when all the votes that were cancelled were my votes? These were areas that I won. There was no need for cancellation but then as a lawyer, I still want to comply with the rules, I don’t want to be talking about infringing on the rules when the elections result is very clear.

Noting that Plateau election is as good as concluded as far as he is concerned, Lalong said, “People came and said their votes were cancelled. It is for them to go back and vote and ensure their vote counts this time around.

RIVERS POLL: APC fears INEC would manipulate results in favour of Wike, warn of dangers ahead