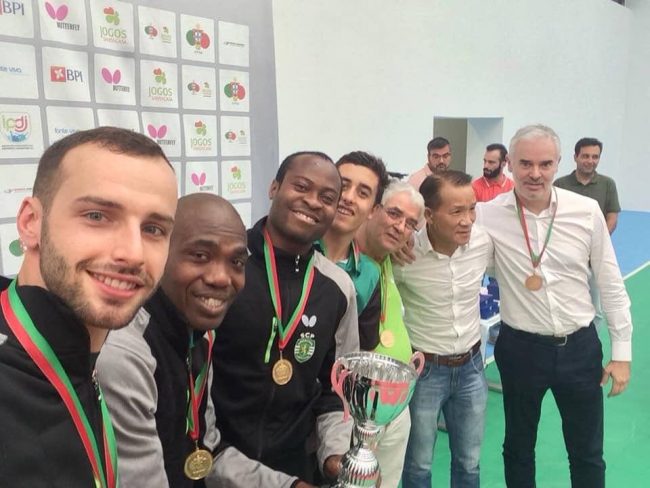 Nigerian Table Tennis star, Aruna Quadri is looking forward to matchday two of the ETTU Champions League after he helped his club Sporting lift the Portuguese Cup over the weekend.

Having lost their opener in the European Table Tennis Union (ETTU) Champions League away to Borussia Dusseldorf, Sporting checkmated ADC Ponta do Pargo to retain the Portuguese Super Cup for the fourth time in a row.

Sporting lined up Quadri, Diogo Carvalho and Bode Abiodun against ADC Ponta do Pargo in the encounter held at the Municipal Pavilion of Nespereira, in Cinfães.

Being the fourth year in a row that Quadri and Abiodun will be lifting the trophy with Sporting and the Lisbon-based team continues to erase their own record having won the title for 13th time more than any team in Portugal.

For Quadri, the win serves as a god preparation for this week’s ETTU Champions league tie at home to Czech Republic’s TTC Ostrava.

“We are indeed looking forward to the Champions League match on October 11 at home and we hope that this win will give us the needed motivation to do well against the visiting Czech side,” he said.

“Despite losing the first match away to the defending champion, we are still hopeful that we can make it from the group but I must also admit that we missed the presence of our captain, Joao Monteiro who is yet to recover from the injury he copped before the start of the European Championships in Alicante, Spain. I am confidence that we can do well against the visitors when we clash this week in Lisbon,” Quadri said.

Sitting at the bottom of Group A of the Champions League, which has defending champion – Germany’s Borussia Dusseldorf and former champion, France’s AS Pontoise Cergy, Sporting hopes to rediscover their form which saw them making it to the semifinal in their maiden outing in the lucrative league.