QuickRead: Buhari sits as judge. Four other stories we tracked and why they matter | Ripples Nigeria 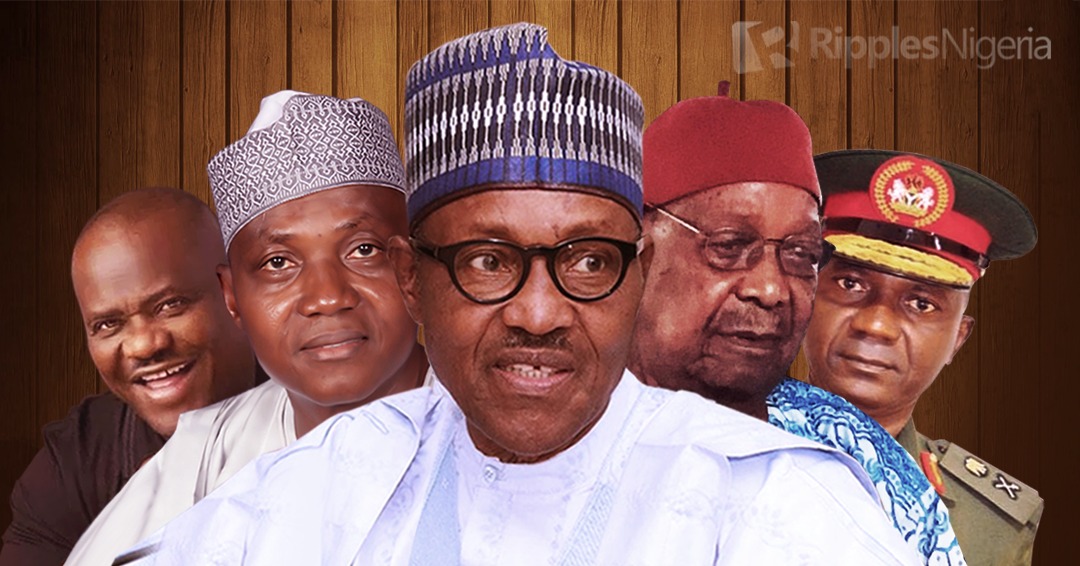 Buhari’s introspection on his administration is a major feature on QuickRead, as we review key political developments shaping the future of Nigeria.

Beyond President Muhammadu Buhari’s plea asking Nigerians to be fair in criticising his government, there was also the frustration expressed by a foremost nationalist, Chief Mbazulike Amaechi, over how Nigeria has failed as a country and and why it should start rebuilding all over again.

Three other political events caught our attention and their implications for national development cannot be ignored.

President Muhammadu Buhari on Thursday, January 14, begged Nigerians to be fair in their criticism of his administration.

He entered the plea when he received the Executive Secretary of the Nigeria Christian Pilgrims Commission, Rev. Yakubu Pam, at the Presidential Villa, Abuja. He reminded those condemning his administration of the state of the country before he took over power in May 2015.

“Those criticising the administration should be fair in terms of reflecting on where we were before we came, where we are now and what resources are available to us and what we have done with limited resources. What was the situation when we came?

“Try and ask people from Borno or from Adamawa for that matter and Yobe. What was the condition before we came and what is the condition now? … The government is doing its best and I hope that eventually, our best will be good enough,” he had retorted.

Buhari asking Nigerians to be fair in criticising the obvious failings of his administration is a reminder to people in positions of authority that there will always come a time for accountability.

The President and the ruling All Progressives Congress (APC) cannot deny their key promises in the run up to the elections that brought them to power. These were founded on an anti-graft war, ending the Boko Haram insurgency and rebuilding the economy.

While Buhari is entitled to a self-appraisal, the hard reality is that the assessment returned by Nigerians is what really matters. In this case, the overwhelming feeling is that the country has hardly made progress in a forward direction.

In calling for fairness, which the administration is sure to get in sufficient doses, what matters most is the objective conditions confronting Nigerians in their daily struggles to survive.

The facts do no suggest that the Buhari administration can be trusted well enough to be objective in its self-appraisal. Put succinctly, it cannot be a judge in its own case.

A foremost nationalist, Chief Mbazulike Amaechi, on Thursday, January 14 said that Nigeria had failed and should start all over again.

Speaking at the “2nd Never Again Conference: 51 Years After the Nigerian-Biafran Civil War,” organised by an Igbo think-tank, Nzuko Umunna Amaechi said:
“I am sad. This is no longer the country we founded. This country has to start all over again. You can’t beat someone and ask him not to cry. If you don’t like us, let us go. I don’t want to go, I believe in one Nigeria.”

The elder statesman speaks to the frustration of many Nigerians over how a country so richly endowed and touted to be an emerging black power has found itself grappling with poverty and literarily lying prostrate.

Amaechi’s position, though extreme in its postulations, highlights the failings of the Nigerian project wherein its federating units are beginning to query their sense of belonging.

The fault lines have become more apparent and draws urgent attention to the need for an honest conversation on the future of the country.

The Defence Headquarters on Friday, January 16, boasted that the Boko Haram terrorists had been severely weakened and no longer had a stronghold in Borno State and other parts of North-East.

The Coordinator of the Defence Media Operations, John Enenche, had said:

Read also: QuickRead: Kukah’s bombshell, Buhari’s assurances. Three other stories we tracked and why they matter

“Now, what we have are Boko Haram and ISWAP that are weakened … They are moving from bush to bush, from enclave to enclave, and no longer have authority or sovereignty on any territory in the North-East and by extension, Nigeria. And of course, if there is a strong force to be contended with, why don’t they come out? They cannot come out, they keep hiding.”

For the Nigerian military, the counter narrative on Boko Haram, as advanced by its spokesman, Enenche, falls in the line of duty.

While the push back against insurgents may be on, the pictures of success painted run contrary to the tales shared by the northern political elites who admit that the region has become the most insecure place to live in the country.

And, for Governor Babagana Zulum of Borno State, whose territory is in the throes of terrorists, his confessions on the number of Local Government Areas still under the control of Boko Haram remain a food for thought.

Inviting Boko Haram to change from its asymmetric war strategy is to trivialize the conversation on the war efforts. The military, in its propaganda efforts, may unwittingly be making the mistake of underestimating the intelligence of the populace.

The Rivers State Governor, Nyesom Wike, on Friday, January 15, rued the inability of the service chiefs to tackle the Boko Haram insurgents despite years of full engagement.

Speaking during the wreath-laying and parade ceremony to mark the country’s Armed Forces Remembrance Day in Port Harcourt, Wike said, among others:

“We thank the service chiefs for their efforts so far in the battle against the insurgents. But we also align with the concern of citizens that having seemingly reached their wits’ end, they should now give way for fresh hands and ideas to give the fight the impetus that it so strongly needs to ensure that Boko Haram and killer bandits are comprehensively defeated and smoked out of existence.”

Wike only lends a voice to those of many other Nigerians on the country’s fatigued security chiefs.

That President Buhari is adamant in his ways means that, as Commander-in-Chief, the buck stops on his table.

The mounting insecurity issues, therefore, must be squarely placed on his laps and no other. He has performed poorly!

The country’s failing security architecture also calls for a reappraisal such that the federating units can truly take responsibility, and the likes of Wike can also be held accountable for internal security issues in their own enclaves.

The Senior Special Assistant on Media and Publicity to the President, Garba Shehu, on Monday, January 11, gave what many considered a lame excuse on why Buhari has refused to sack his service chiefs.

Shehu, speaking when he featured on a television programme, told Nigerians that Buhari refused to sack the security chiefs because he was seeing things that critics were not seeing.

“He is seeing things most people don’t see,” Shehu said.

Again, Shehu’s seeming lame excuse must be seen as another delivery in the line of duty.

It speaks to the everyday challenges of a reputation manager who is forced to find the right excuses for his principal even if it is obvious that the realities of the situation tell a different story.

It is a task he must deliver or quit!

While Shehu may be right to argue that Buhari, by his position, sees things many do not see, he deserves pity for thinking that Nigerians do not realize that there are many things wrong with the strategies deployed to fight the war against insurgency.

If anything, many agree that conflict entrepreneurs have emerged from the misfortunes of the war and that the military hierarchy may be stewed in it.