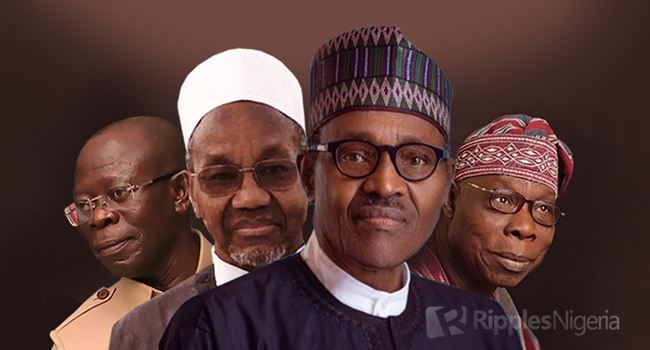 Last week, like the preceding ones, came with a lot of exciting stories. Among them include President Muhammadu Buhari’s declaration that he had done his best in the fight against Boko Haram, and Governor Babagana Zulum’s escape from terrorist attack.

Like always, we are not only refreshing your memories about these stories but also providing hints on why they may be critical to our national development. Enjoy!

Amid the worsening security issues across the country, especially in the northern region, President Buhari on Friday, July 31 told Nigerians that his administration had done its best in tackling the Boko Haram insurgency and other violent crimes in the country.

He told State House correspondents at the Presidential Villa, Abuja: “I want Nigerians to be very conscious of their country and what we inherited when we came in 2015 was Boko Haram – North East and the militants – South-South. Nigerians know that we have done our best.”

He added, “What is coming up in the Northwest and North-central is very disturbing indeed but I believe the military. However, the police, and other law enforcement agencies from the report I am getting, I think they could do much better.”

The declaration, ‘we have done our best’ has left many Nigerians guessing about its full import. On the one hand, it suggests a disposition of surrender knowing that Buhari’s administration cannot claim comfortable victory over bandits and insurgents since it came to power. On the other, was Buhari not literarily acknowledging that his government had failed to secure Nigerians from terrorists as it had become very evident to citizens that the objective conditions point to a deteriorating situation.

Indeed, by reiterating that the current level of insecurity in the country surpassed what he met when he emerged as president in 2015, was the President also not saying he had been overwhelmed, leaving citizens to tinker with alternatives that could best secure them?

Buhari may have unwittingly asked Nigerians not to hold him and the ruling All Progressives Congress (APC) anymore responsible for the country’s drift to perdition.

On Wednesday, July 29, Borno governor, Professor Babagana Zulum, was rattled by Boko Haram terrorists when his convoy was attacked while on his way to Baga, a town in the State.

After his escape, the embittered governor could not hold back his anger as he said, “You (Nigerian troops) have been here for over one year now, there are 1,181 soldiers here; if you cannot take over Baga which is less than 5 km from your base, then should we forget about Baga?“

He later vowed to deploy local hunters and vigilante to reclaim the territory if the soldiers would not do that as soon as possible.

Despite claims by the Nigerian military that the attack on Zulum’s convoy was an isolated incident, one obvious conclusion to be drawn from the incident is that there could, indeed, be saboteurs within the rank and file of the fighting force.

Several posers have been raised, among which are: Why is Baga, a town less than 5 km from one of the biggest military bases in the Northeast, still being held captive by Boko Haram? How come intelligence failed woefully to detect and preempt the surprise attack on Governor Zulum? And, why has the military resorted to ‘repelling’ instead of taking the war to the insurgents?

Findings suggest the insurgency in the Northeast may have become big business.

A House of Representatives committee claimed a shocking discovery on Tuesday, July 28. The members said they uncovered a clause in a loan agreement that ceded Nigeria’s sovereignty to China.

One of the lawmakers, Ossai Nicholas Ossai, noted that there were lethal clauses in Article 8(1) of the commercial loan agreement signed between Nigeria and Export-Import Bank of China which indirectly “wills the sovereignty of Nigeria” in the $400 million loan for the Nigeria National Information and Communication Technology (ICT) Infrastructure Backbone Phase II Project, signed in 2018.

“I have also seen from the Ministry of Communications where Nigeria signed off some certain level of its sovereignty if part of the clauses is breached,” the chairman of the committee, Ossai said during an investigative hearing into some of the agreements signed between Nigeria and China.

The ‘revelations’ are a pointer to the many disconnects between the country’s executive and legislative arms of government which lead to very shoddy decisions on the nation’s future.

The ‘shocking discovery’ does not only raise concerns over quality of decision-making but also the utter disregard for processes and procedures that ordinarily should checkmate abuses by public officials.

The issues raised by the House committee, if found correct and deliberate, would be a proof of widely-held opinions that the National Assembly is sometimes peopled by lazy and indolent Nigerians whose raison d’etre is not to serve but feed fat from the till.

On Tuesday, July 28, Mamman Daura, a nephew to President Buhari poked at the issue of whose turn it was to produce the next President of Nigeria in 2023, when his relative’s tenure in office would have expired.

Daura, in a brief interview with BBC Hausa Service, said: “This turn by turn, it was done once, it was done twice, it was done thrice…It is better for this country to be one”, he said, adding that the issue of who should be trusted with power should be on merit, “for the most competent and not for someone who comes from somewhere.”

Daura may have only shed light on the underground moves by the north not to relinquish power to the south in an unwritten power rotation policy. The politicking is supported by remarks credited to the National President of the Arewa Youth Consultative Forum, Yerima Shettima, who said that the North was not prepared to release political power in 2023 to the South.

To many watchers of Nigeria’s political space, the northern intelligentsia is merely testing the waters, and who else to stoke the fire but one of the few regarded as an influential member of the cabals guiding the Buhari presidency.

The Buhari-led presidency on Monday, July 27, announced it had named train stations along the Lagos-Ibadan and the Itakpe-Ajaokuta-Warri corridors after ‘deserving Nigerians’.

The list of the deserving Nigerians released by the Ministry of Transportation, under the control of Rotimi Amaechi, conspicuously omitted the name of the first Nigerian President after the return of Democracy in 1999, Chief Olusegun Obasanjo.

The programmed return of train services has become a poster project for the Buhari administration, and explains why the honour done to some deserving Nigerians has become topical. As commendable as it is, the naming exercise has raised eyebrows, especially with the conspicuous absence of former President Obasanjo’s name from the list.

Is this to be considered a slip? Or, could it be a matter of vindictive response against a a leader whose acerbic writings had severally jolted the Buhari government? The loud silence at the presidency can only be a subject of haphazard conjectures.

The former national chairman of APC, Adams Oshiomhole, on Sunday, July 26 knelt before some party members to seek their forgiveness for supporting Governor Godwin Obaseki in 2016.

“I have made my honest mistakes. Only God is perfect. I am now 68 years. I have come to apologise for the mistake of supporting Obaseki in 2016. I am in Edo to repair my mistakes. God had a reason for what happened to Ize-Iyamu in 2016. Leaving as the national chairman of APC is to give me enough time to correct my errors,” Oshiomhole told his listeners.

In swallowing his own vomit, Oshiomhole provides a vivid picture of the nature and character of the average Nigerian political elite who, devoid of any philosophy or ideology, deploys every known trick to hoodwink the populace.

Oshiomhole, like many of his ilk that have showed up lately on the political scene, believe that the end justifies the means. And, any discerning observer does not have to look far to decipher the truth. From Oshiomhole to Governor Godwin Obaseki to Yakubu Dogara; the list is not about to shorten.