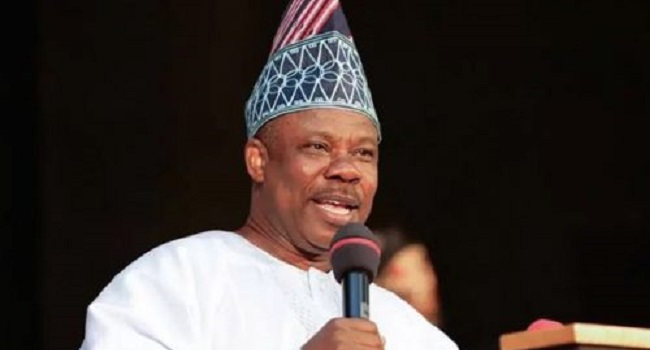 Governor Ibukunle Amosun of Ogun State has reiterated support for the governorship candidate of the Allied Peoples Movement (APM) in the state, Adekunle Akinlade against that of his party, the All Progressives Congress (APC), Dapo Abiodun.

The governor explained that many people who do not understand the reasons for his action have been blaming him for perpetrating anti party activities.

Amosun spoke at Our Saviour’s Anglican Church, Ikenne, in Ikenne Local Government Area during a church service to mark the 60th birthday of the Archbishop of Lagos Ecclesiastical Province and Bishop, Diocese of Remo, Michael Fape.

He explained that it was part of the initial agreement by the APC to ensure the emergence of an indigene of the Ogun West Senatorial District who have been neglected in the past over 43 years existence of the state, as the next governor.

“It is rather unfortunate that the people fighting us right and left, do not know what we have all agreed, since two years ago, that in the spirit of fairness, justice, equity and peace in Ogun, let us now look at our brothers from Ogun West Senatorial district.”

“I won’t take our people for granted and it is for us not to have violence in the state and to continue to live together in peace, that all of us in All Progressives Congress, in Ogun State, took the decision.”

Others at the event included Vice President, Yemi Osinbajo; former governor of Ogun State, Gbenga Daniel; elder statesman, Ayo Adebanjo; and the Akarigbo and Paramount ruler of Remo land, Babatunde Ajayi, among others.