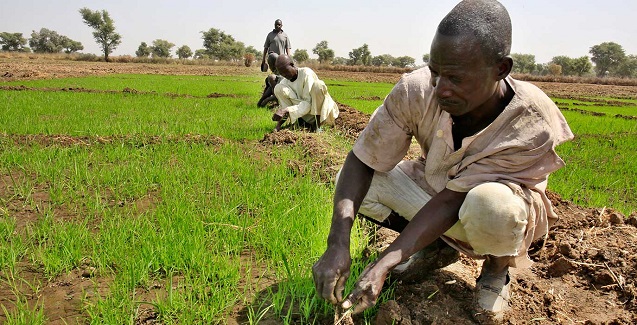 As part of efforts to bring about national food sufficiency, food security and creation of employment, the Ekiti State government has announced plans to partner with its Lagos state counterpart on rice cultivation.

The partnership was announced by the Ekiti State Governor, Ayodele Fayose, via his official Twitter handle (@GovAyoFayose) recently and further confirmed by his deputy who is also the governorship candidate of the Peoples Democratic Party (PDP) in the July 14 gubernatorial election in the state, Prof. Kolapo Olusola Eleka.

“Ekiti govt has signed MoU (Memorandum of Understanding) with Lagos State govt on Rice Cultivation. Land to be provided by the Ekiti govt while Lagos govt provides fund and technical expertise,” Fayose tweeted.

President Muhammadu Buhari had, during the commissioning of the first Rice Seedlings Plant in Africa built by Cross River State government, urged states yet to take advantage of the zero-oil economic road map of the Federal Government to take a cue from Cross River State.

The signing of the deal was in line with President Buhari’s drive to diversify the country’s revenue base away from Crude Oil through investments in other sectors of the economy, particularly agriculture.

It is also expected to help both states synergize to boost local production of rice in the country.

The development is coming a few days after the Federal Government announced its readiness to shut down the land border between Nigeria and a neighbouring country in a bid to stem the tide of rice smuggling into Nigeria along the country’s borders and increase its local production.

Lagos state had signed similar deal to produce Lake Rice with the Kebbi state government a few years ago. According to the Governor of the state, Akinwunmi Ambode, the collaboration, which was aimed at developing agricultural potentials in both states, was the first in the history of the country.

Speaking on the agreement, Eleka said the proposed partnership would employ 9,000 Ekiti youths, even as the state would be concentrating on the production of rice, beans and cassava, among others.

“We have already signed the MOU for rice cultivation of about 10000 hectares, which we hope would engage 9,000 youths in Ekiti. The idea is that Lagos has the money but no land, whereas, Ekiti has land for farming, but no money,” Eleka said.

Ekiti state, which constituted well over 40 percent of the cocoa products of the famous old Western Region, has about 6,353 km² land area with over 2 million population size. Despite the land’s buoyancy in agricultural resources, the state struggled to generate N5 billion as Internally Generated Revenue (IGR) in 2017.

Meanwhile, Lagos state, which is the smallest state in terms of land area in the country, is arguably the most economically viable state in the federation. With about 20 million population size, the state generated over N333 billion as IGR in 2017, an amount which accounted for about 36 percent of the entire IGR by all the states of the federation within the period.