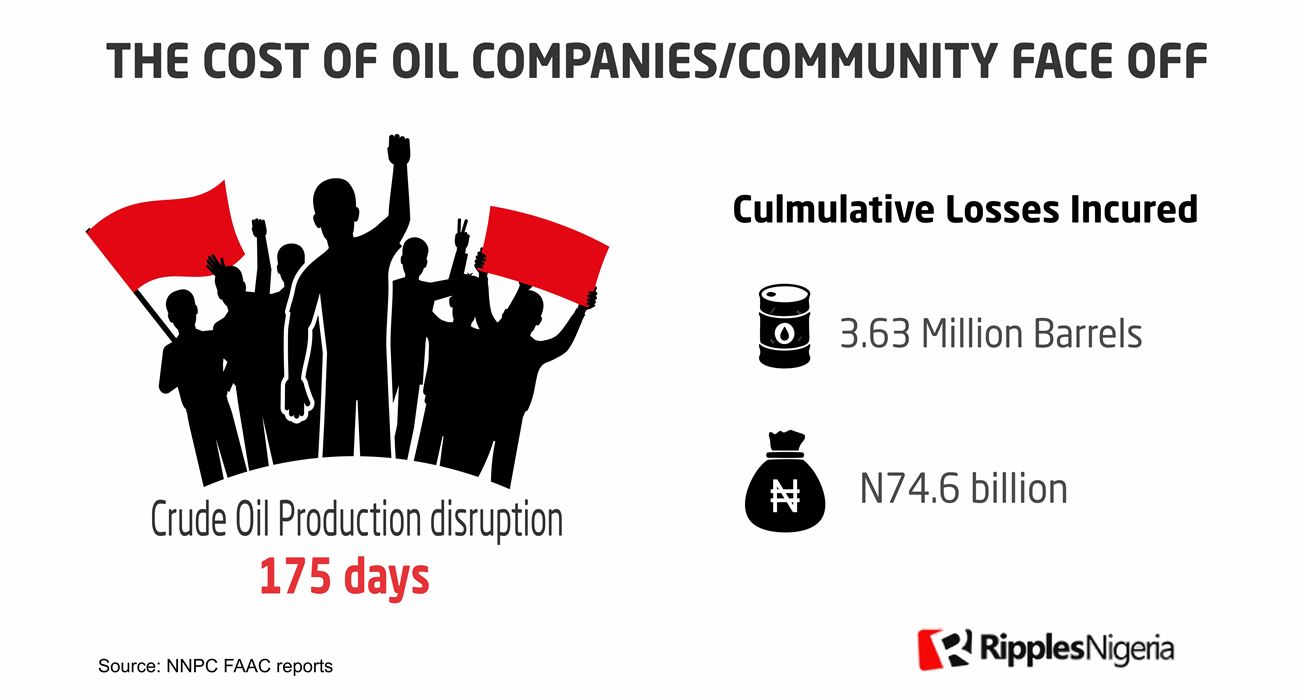 The continuous face off between Nigeria National Petroleum Corporation (NNPC), oil companies and host communities came at a huge cost for Nigeria’s oil revenue in 2020.

The face off resulted in the shutdown of terminals for 175 days during the year.

When the 3.6 million barrels of oil is calculated using the average price of the international Brent crude, the benchmark for Nigerian crude oil which sold for an average price of $50 in 2020, the fight cost Nigeria’s ailing economy over N74.6 billion (at an exchange rate of N410/$1)

In fact, the loss recorded is higher than the N67 billion borrowed last year by the federal government.

January 2020 analysis of NNPC’s FAAC report indicated production disruption at Forcados terminal by community and workers for 13 days which cost the country 104,000 barrels of oil valued at $5.2 million (around N2.1 billion).

Also in the month of January, at UGO OCHA terminal, Jones Creek flow station was shut down for 10 days, resulting in the loss of another 250,000 barrels of oil which could have fetched Nigeria $12.5 million (N5.1 billion).

Again, at UGO OCHA terminal in Janaury, workers and the community halted production at Odidi flow station. This lasted for 12days, costing the country 180,000 barrels that could have generated $9 million (N3.6 billion).

February had no record of community or workers unrest.

But the agitations resumed in March into April. For 23 days, members of the community blocked passage to TULJA terminal, costing the country 200,000 barrels worth $10 million (N4.1 billion).

In May, FORCARDO terminals were also shut for seven days by the community leading to no production of 336,000 barrels that could have generated $16 million (N6.8 billion) oil revenue.

In same month of May, for three days, community protest against NECONDE Energy Company shut down Batan and Odidi flow stations in west delta resulting in the loss of 30,000 bpd, worth $1.5 million (N615 million).

First was at Jones Creek flow station as the community and workers shut the unit over unpaid salaries for 3 days. This cost Nigeria 72,000 barrels, worth $3.2 million (N1.4 billion) revenue.

In September, at OML 30, the large onshore block in the western Niger Delta, community protests shutdown FORCADOS terminal, over compensation by heriatage which resulted in Nigeria losing 280,000 barrels of oil valued at $1.4 million (N5.7 billion).

The losses reached the highest level in November as community and workers protests cost Nigeria 1,073,000 barrels of oil valued at around $53 million (N21.9 billion). The protest lasted for 29 days at Odidi flow station under UGO OCHA terminal.

In the same November, another protest took place at Forcados terminal that lasted for 12 days, costing the country 110,400 barrels valued at $5.5 million (N22.6 billion).

Another community protest also brought all flow station at FORCARDO terminal to a standstill for 14 days, resulting to the second biggest loss of 420,000 barrels that could have generated $21 million (N8.6 billion).

What N74.6 billion losses could do for Nigerian citizens

It can, indeed, be argued rightly that host communities have suffered wide-scale socio-economic deprivation over the years.

This view was buttressed in December last year by Dumnamene Dekor, Chairman Committee on Host Communities, at the House of Representatives.

According to him, the agitation by host communities in the oil-producing states, especially in the Niger Delta region, is a result of the failure by government and oil companies to tackle the problems residents are facing.

In his words, “Despite the riches, neither the oil companies nor government has shown a strong will in addressing the common needs of these host communities. The people have felt little or no impact of the government and oil companies who derive their revenue from oil prospecting in this land have yet to show zeal and genuine concern for the welfare of these people.”

However, if the face-off were averted, the N74 billion could have gone a long way in addressing some of the socio economic issues the region is facing.

For instance the N74.6 billion wasted could have provided one year salary of at least 2 million youths at N30,000 minimum wage.

The six oil rich South-South states, according to National Bureau of Statistics (NBS), as at December 2020 had 5.8 million unemployed Nigerians.

But the question on the lips of many indigenes, and indeed Nigerians, is why successive governments have failed to address the needs of host communities, making the gift of crude oil to appear as a curse rather than a blessing.