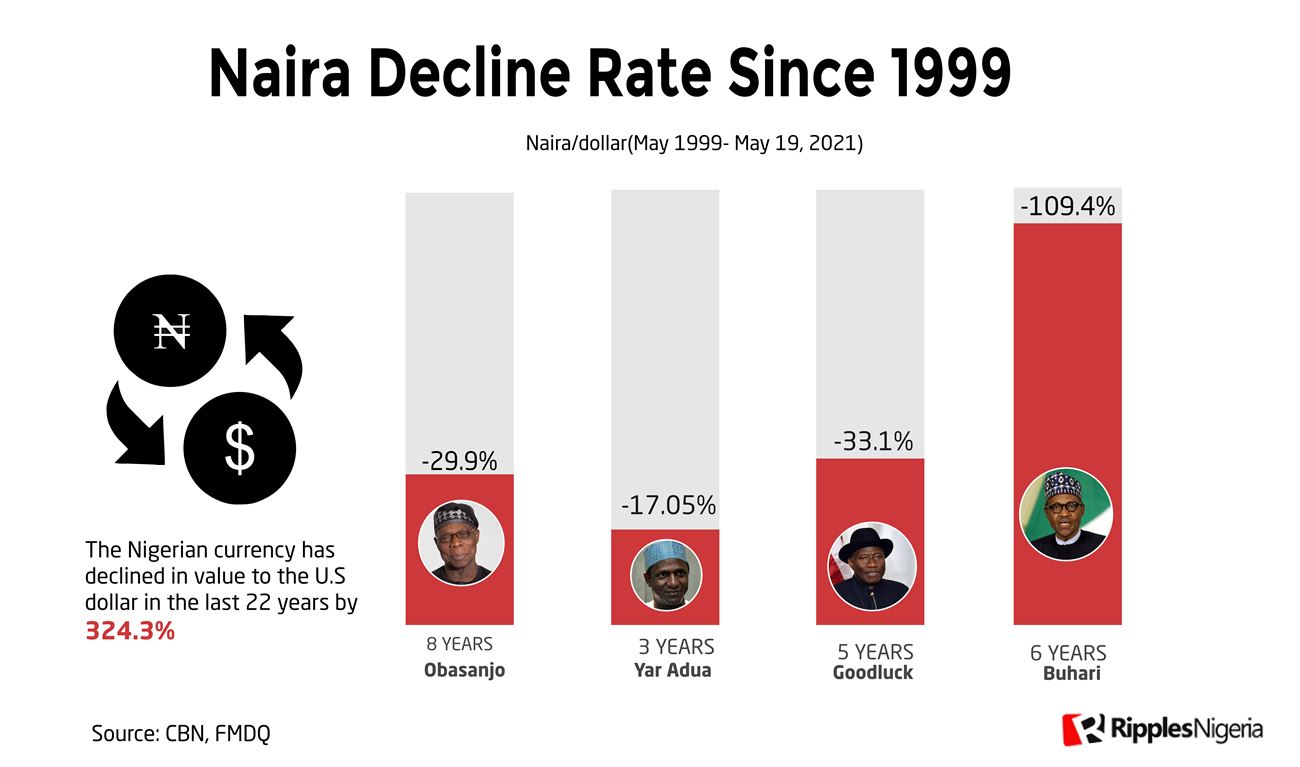 How low will the Nigerian naira go against the US dollar, and what does the future hold? These and other concerns are on the minds of Nigerians who have seen the worth of their Naira investments depreciate over time.

Over this period, Nigerians have elected four presidents, each of whom has appointed four different Central Bank governors and eight different Ministers of Finance.

According to CBN reports, the Naira traded at N97 to the US dollar at the start of Obasanjo’s presidency.

Over the course of his administration, the Naira-to-dollar exchange rate fell by 29.9 percent to N126.1/$1.

Following the end of Obasanjo’s tenure, Late Musa Yar’Adua assumed the mantle of leadership in the country.

During Musa Yar’Adua administration Chukwuma Soludo and Sanusi Lamido Sanusi served as CBN governors while Shamsuddeen Usman and Mansur Mukhtar worked as his Ministers of Finance.

Despite successes marginal success recorded, the naira finished Yar’Adua’s reign with a 17.05 percent loss in value, closing at N147.61 to the dollar.

As in previous years, Jonathan’s five-year tenure saw the Naira dropping from N147.61 to N196.5 to the US dollar by the time he left office. This represents a 33.1 percent depreciation of the Naira.

The first Finance Minister was Kemi Adeosun, who was succeeded by the current Minister, Zianab Ahmed.

At the time President Buhari assumed office, the Naira was trading at N196.5 to the dollar.

Six years on, the Naira has taken the biggest blow, falling by 109.4 percent to N411.65 as of Wednesday, May 19th, according to data from the FMDQ buyers and exporters window.

Although no formal confirmation from the apex bank on the usage of flexible exchange rates, the removal of the N379/$1 from the CBN website has indicated Nigeria is firmly in new exchange rate territory.

Analysts also expect a further drop before the end of the year, closer to N500 to a dollar.

Implications of the Continued Devaluation of the Naira

Due to the economic structure of Nigeria and heavy dependence on imports, the continuing depreciation of the Naira is very bad news.

Not only will Nigeria’s trade balance continue to suffer, but imports will become more costly, with Nigerians bearing the brunt of the bill.

Take for instance, small scale business owner buying dollar at N380 to $1 to import a raw material that requires $50,000 every month.

RipplesMetrics: Data reveal 5 out of every 10 classrooms unfit for learning as Nigeria marks Children’s Day