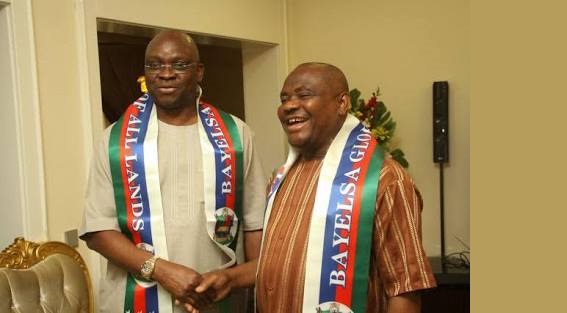 The Rivers State Chapter of All Progressives Congress (APC) has alleged, that governor of the state, Nyesom Wike, has concluded plans to pay off six months’ salary arrears the government of Ekiti State is owing its workers ahead of the forth coming governorship election in that state.

The party stated that the curious bailout Gov Wike is about offering his Ekiti State counterpart, Ayo Fayose, will be coming against the backdrop of imminent reduction of the number of civil servants of Rivers State which Gov Wike has ordered.

The party in a statement on Monday by its State Publicity Secretary, Chris Finebone, noted that “it comes against a decaying secretariat complex where Rivers State civil servants endure untold inconveniences every working day. Indeed, it comes against the suffering of pensioners owed several months of gratuity and pension. Paradoxically, even political appointees of Gov. Wike are enduring untold hardship, suffering and smiling except for the select cabal popularly referred to as Cardinals”.

He stated that after the defeat of the Peoples Democratic Party (PDP) in the 2015 presidential elections, Gov. Nyesom Wike effectively took over control of the party nationally and “has since been spending billions of naira belonging to Rivers taxpayers to sustain the PDP”.

Finebone further alleged, that “Sadly, we recall that Gov. Wike spent several billions of naira to hold an ill-fated national convention of the party in Port Harcourt in May, 2016. Afterwards, Wike single-handedly sustained the PDP with billions of naira belonging to Rivers people throughout the period the party was under the leadership of Markarfi-led caretaker committee. Gov. Wike it was who used the resources of Rivers State to fund the protracted legal tussle between the caretaker committee and its factional group led by Senator Ali Modu Sheriff.

“Following the victory of the Makarfi-led caretaker committee at the Supreme Court, Gov. Wike, again, bankrolled the national convention of the party that followed in 2017 with Rivers State commonwealth. This culminated in Wike decimating and silencing the South-West and other leaders in PDP to successfully capture the national structure of PDP by installing his acolyte and stooge, Prince Uche Secondus as the party’s national chairman.

“Quite sadly, we note that the decision of Gov. Wike to pay outstanding six months salaries owed to Ekiti State civil servants is coming as part of Wike’s inordinate desire to maintain his position as the leading financier and national leader of PDP. Whereas other PDP governors are busy developing their states and bettering the standard of living of their people, Gov Wike remains consumed by the obscene and inordinate craving to continue as the little god of PDP.

“While no one begrudges him the pursuit of his vane glory, the bitter truth is that Gov Wike is fritting away resources that should be channelled at bettering the lot of the ordinary Rivers people.

“We find it hard to believe that a governor that came into office and immediately discontinued and returned Rivers youths on overseas scholarship on account of lack of funds, finds it convenient to play Father Christmas for purely political reasons. We ask: why is it that other PDP governors of equally oil-rich Akwa Ibom and Delta States are not throwing the commonwealth of their people at sustaining and controlling the PDP?

“Again, we recall that in his bid to take advantage of the killings in Benue State some months ago, Gov. Wike doled out N500m to Benue State with the sole aim of luring Governor Ortom to join the PDP. The Benue State governor collected the money and boldly rebuffed Wike’s entreaties. In that drama, the poor Rivers taxpayers were the losers while Wike continues in his extravaganza with our money.

“The APC calls on Rivers people to protest the decision of Gov. Nyesom Wike to, once again, embark on this senseless and atrocious decision to spend billions of naira belonging to Rivers people to pay six months outstanding salaries of Ekiti State civil servants while the workers and people of Rivers State are suffering poverty, indignities and penury”.