Home » Politics » Senate resumes fight with Buhari over Magu, vows not to screen any nominees 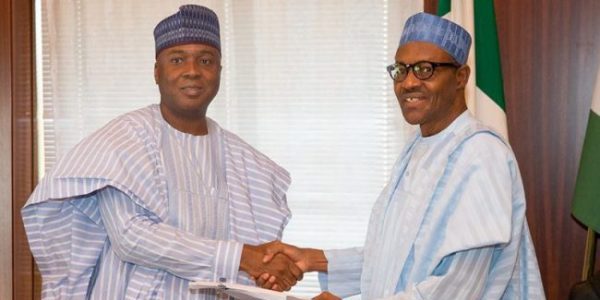 The face-off between the Senate and President Muhammadu Buhari over the appointment of the acting chairman of the Economic and Financial Crimes Commission (EFCC), Mr. Ibrahim Magu, portends grave consequences for the economy.

Quoting from a judgment by a Federal High Court in Abuja, which affirmed its powers to confirm or reject the President’s appointments, the upper legislative chamber insisted that it would never consider all nominations which the President had submitted to it.

Top among the President’s nominations that have been kept in abeyance by the Senate because of the impasse include the nominee for the position of Deputy Governor of Central Bank of Nigeria (CBN) and four members of the apex bank’s Monetary Policy Committee (MPC).

The Senate specifically declared that the failure of the CBN to form a quorum for the meeting of the MPC should be blamed on the Presidency which had failed to do the right thing by complying with the constitution and the law on appointments.

Senate spokesman, Aliu Sabi Abdullahi, who briefed journalists on the development stated: “By this (court) judgement, for those who have been worried that the Monetary Policy Committee never met, I think this is a window for the MPC to see the light in meeting.

“If the Executive does the needful, provide another Nigerian of credible character of which we have millions of them – 180 million of them – even by arithmetic error, we should be able to get good people.

He continued: “So, it is our hope and prayer that our amiable President will find this judgement in order and will be submitting very soon another nominee to carry on with the good work of anti-corruption, especially now that we are very proud of him as the African Union Anti-Corruption Ambassador.”

Over 40 other nominations including heads and board members of the Pension Commission (PenCom), Independent Corrupt Practices and other related offences Commission (ICPC), National Lottery Regulatory Commission (NLRC), Federal Roads Maintenance Agency (FERMA) are also being kept in abeyance.

The MPC is the engine room for the effective delivery of the functions of the CBN and it holds its meetings once every two months, and six times a year.

At the moment, the apex bank has no quorum with which to hold the mandatory MPC meeting.

When it failed to hold the January 2018 meeting, CBN governor, Godwin Emefiele, had said the earlier scheduled meeting for MPC slated for 22-23 January, 2018 was cancelled due to the Bank’s inability to form a quorum as stipulated in the CBN Act 2007.

He said that a revised schedule of the Meetings for the MPC would be communicated as soon as the Bank met the statutory requirements of membership and quorum for the MPC.

The Senate also renewed its call for immediate replacement of Magu by the President through the nomination of another person to it for confirmation.

It called on President Buhari to comply with a court judgment which upheld its powers of confirmation and rejection of President’s appointments.

The Senate had in 2016 rejected the appointment of Magu after receiving a letter from the Department of State Services (DSS) declaring that Magu failed integrity test.

But Vice President Yemi Osinbajo, who was then the acting President made a declaration that the Senate actually lacked the powers to confirm such appointments .

Relying on suggestions that the President could keep Magu as chairman of the commission in acting capacity, the President has since left Magu to continue to act.

The Senate said the President needs to immediately comply with the judgment particularly to honour the recognition accorded him by the African Union (AU) at its last meeting in Addis Ababa (Ethiopia) where he was pronounced the champion of anti-corruption in Africa.