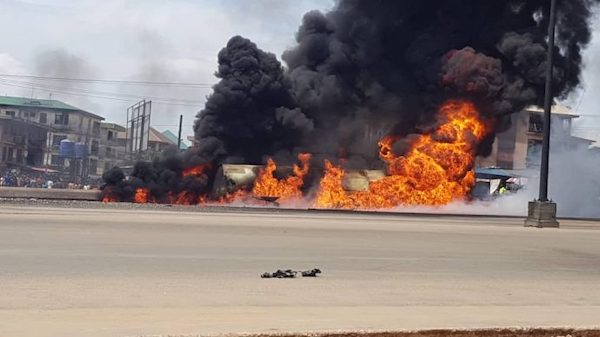 At least six buildings and shops were on Wednesday razed by fire at Upper Iweka, on Onitsha/Awka Road in Onitsha, after a 33,000-litre diesel tanker fell and caught fire.

The truck had reportedly lost control and exploded after ramming into some buildings in the Upper Iweka axis of the commercial city.

The Sector Commander of the Federal Road Safety Commission, Anambra Command, Andrew Kumapayi, confirmed the development to journalists in Awka.

Kumapayi said the incident occurred at 12:44 p.m. He explained that the fire service officials got to the scene of the incident in time but could not put out the fire as their water pump developed a fault.

He said: “The tanker lost control due to brake failure, the head of the vehicle pulled out while the tank containing diesel fell into the gutter, spilled its content on the road and caught fire due to the spill.

“The fire spread through the gutter and affected at least six houses on the road and shops in Ochanja Market.
“No life was lost and no other vehicle was affected.

“The fire service got there on time but their pump developed a fault. They left the scene to fix the pump and restrategise.

“If the pump had functioned, the fire wouldn’t have spread to the houses and shops,” he said.
Kumapayi warned tanker owners and drivers to ensure that their vehicles were in good condition before plying the roads.

“The saving grace was the road bumps constructed by the state government; it prevented the tanker from ramming into buildings around the area,” the FRSC official added.

Kumapayi said that policemen and FRSC officials were on ground to maintain order and ensure a free flow of traffic.