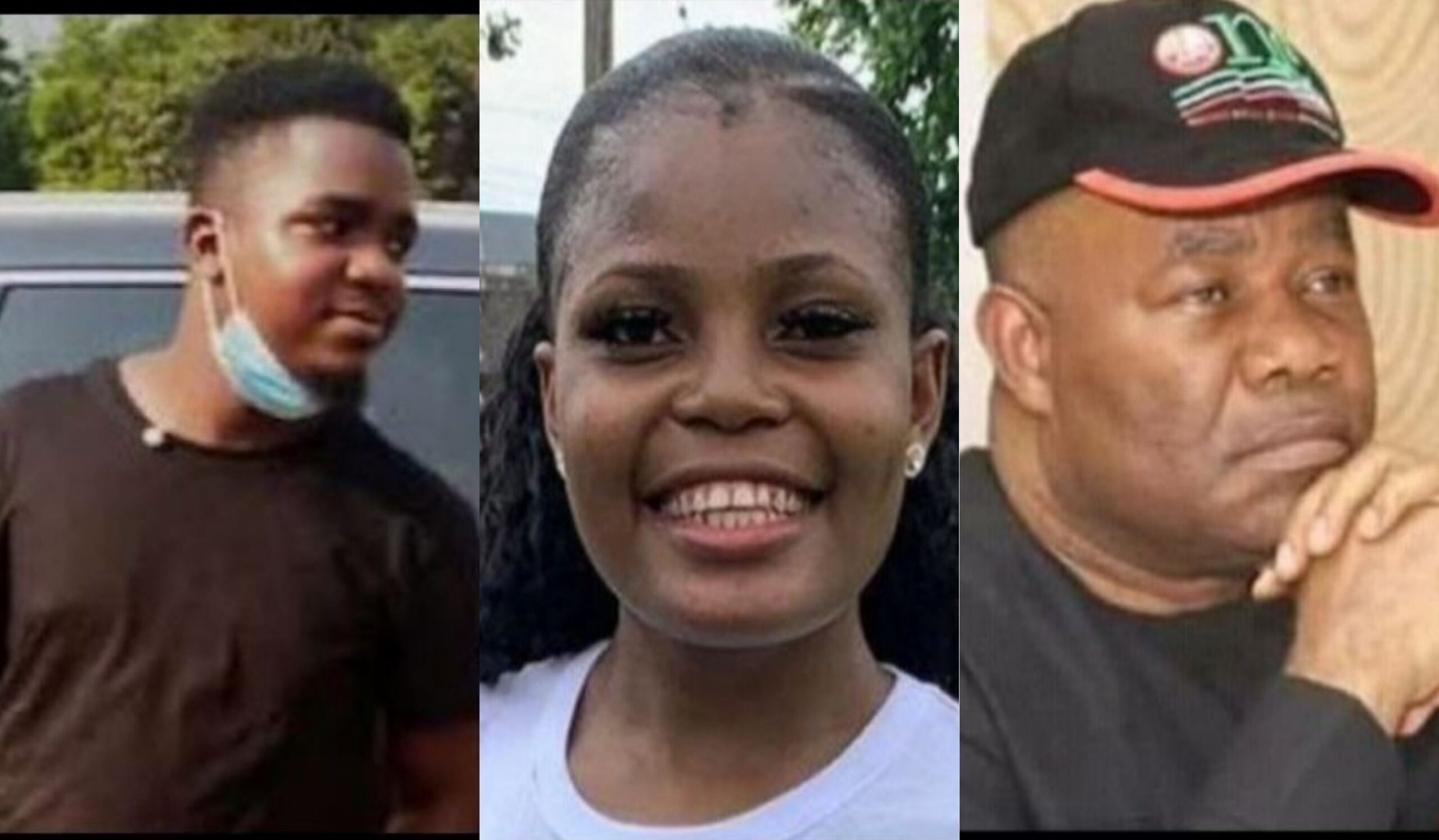 Ripples Nigeria had earlier reported how 26-year-old graduate, Umoren met her unfortunate death in the hands of one Uduak Frank Akpan, who allegedly lured her with a faux job interview in AkwaIbom last month.

According to a statement released by the Police PRO, Odiko Macdon, the suspect allegedly raped the victim, killed her and deposited her remains in a shallow grave.

Hundeyin in his investigative report titled, “Murder in Uyo: Who Killed Hiny Umoren”, alleged that Uduak Frank Akpan, the prime suspect, infact did not work alone.

The journalist revealed that the suspect allegedly made telephone conversations with one Kufre Effiong, a worker in the Niger Delta Civil Service, after the supposed crime had been carried out.

The reporter further alleged that Akpan and Effiong met physically at a certain 58G Ewet Housing Estate in Uyo.

Hundeyin would later tweet: “It has just come to my attention that Davok Suites, the hotel at the centre of the 58 Unit G/S.9, Unit G, Ewet Housing Estate nexus involving Kufre Effiong and Frank Uduak Akpan is owned by none other than Ekaette Akpabio, wife of Godswill Akpabio.

“In other words, this place where Frank Uduak Akpan, fresh from murdering Ini Umoren came to meet Kufre Effiong, belongs to the wife of Kufre’s boss and Federal Minister of Niger Delta Affairs Godswill Akpabio. So which politician has Kufre been ‘running errands’ for?”

Akpabio and his wife, reacting through a letter filed by their law firm, Star Attorney, have denied ownership of the said Davok suite nor the housing estate mentioned in the publication.

The letter read in part:

“We hasten to make a point that assuming (though without conceding) that Kufre Effiong is a staff of the Ministry of Niger Delta Affairs and/or one of its contractors, Senator Akpabio does not know, has never met and has never had any contact whatsoever with him. Neither Sen Godswill Akpabio nor his wife, Mrs Ekaette Akpabio had anything whatsoever to do with the horrific death of Iniobong Umoren.

“Secondly, neither Davok Suites (which is a corpate entity) nor the land housing it belongs to Mrs Ekaete Akpabio.

“Indeed, a proper search at the Corporate Affairs Commission would have disclosed to you that Mrs Ekaete Akpabio is neither one of the Directors nor Shareholders of Davok Suites.”

They have however demanded an immediate retraction of the publication and a public apology, adding that a lawsuit would be filed upon failure of the Journalist to act accordingly within two weeks.

Hundeyin on the other hand, has continued to enjoy massive support from Nigerians across social media, in his quest to seek justice for the slain job seeker.

Some, who are, however, skeptical about his ‘radical’ approach, were also quick to advise him.

Hi @Senator_Akpabio, this has come to my attention.

First of all, no idea why the lawyer you hired addressed it to BusinessDay as if I work there🤷🏿‍♂️

Dear @DavidHundeyin please don’t be scared of a Defamation lawsuit from Godswill Akpabio, they just wanna scare you shirtless. Akpabio doesn’t have a reputation that could survive in a Magistrate’s court. Thank you! pic.twitter.com/4RB3N0FBA7

Wait, someone said you sent someone to kill someone, turns out you know nothing of the person, instead of clear your name you will "help bring the murderer to justice first? Lol u never see wahala sha

This is the funniest advice I’ve ever read.😂😂 Akpabio one more step, Nigerians will have your manual. Don’t try David

Nah! He is confident because he probably doesn’t live in Nigeria and has no hope of visiting home. He was very wrong to draw false conclusions. If that hotel doesn’t belong to the Akpabios and Kufre doesn’t work for Akpabio as he alleged, an apology is needed

I told someone this yesterday. He will drop it like singles and albums 😅😅😅

I kuku need everything about this case to go through a legal discovery process.

That's when David Hundeyin will become the very least of some people's problems.🙂

Akpabio think it's Everytime they will ask him to off his mic. This time, he will finish this rap

It was an emotional Friday for Nigerians on social media Iniubong Umoren was laid to rest at Nung Ita Ikot Obion, Oruk Anam Local government area of Akwa Ibom state.

The young graduate who was allegedly raped and killed after attending an inexistent job interview was buried amid tears by family members and friends.

Sleep well Iniubong Umoren. May your killers and everyone connected to your untimely death never know peace.

INIUBONG UMOREN, as you are laid to Rest today, May your soul find rest in the Bosoms of ABRAHAM

RIP Iniubong Umoren. As you're laid to rest today, may ur soul find rest in the bossom of the Lord 🕊

May the Angels receive her soul.
Eternal rest grant unto her, O Lord.
May Iniubong Umoren and the souls of all the faithful departed rest in peace. Amen

May her killers, Sponsors and Facilitators be punished eternally. Amen#JusticeForHinyUmoren

Guy, I have never thought of a day that I would bid you farewell but It saddens my heart that I have to do that today.
You'll forever be in my heart. Farewell!
And for those that committed such horrible things to you, God will not let them go unpunished.#JusticeforHinyHumoren pic.twitter.com/UlXIiQZREM

It's deeper than you think she still won't get it

Uduak Frank Akpan, the suspected killer of Ms. Umoren, has revealed that he killed the deceased in self defense.

Akpan who was paraded by the police on Friday, narrated to journalists how he lured the victim to the location on that fateful day and killed her with a stabilizer for trying to harm him.

“When she got to the location I asked her if she can work as a Secretary on a farm where drugs are produced and she said yes,” he said

“However, I told her that there were no such existing jobs but that I would love to have sex with her and she accepted on the condition that I use a condom.

“She got furious when along the line I tried to remove the condom and reached for an object to hit me. She also bit me and in anger, I retaliated and hit her with a stabilizer and she started bleeding.

Akpan’s confession seemed to have gotten on the nerves of Nigerians who reacted to the development thus:

Who printed the customized T-shirt Uduak Frank Akpan was putting on for the so called press conference? The guy looked and sounded like he has some powerful forces giving him assurance of coming out of this crime.

Uduak Akpan was relaxed, balanced on a chair wearing Murder Squad tee S… Speaking to press in a press conference😒 What am I missing? #JusticeForHinyUmoren

"Are you remorseful?"
"What's your advice to young men?"
"Were you in love with her?"( Iniubong Umoren)

These people must be mad 😒

Omo see the way they're parading that Uduak Akpan like a celebrity, one oloriburuku journalist was even asking him for advice for the youths, Uduak an alleged murderer, was looking fresh than Nigerian youths that were arrested at Lekki Toll gate for protesting in Police custody.

Uduak Akpan who murdered Iniubong Hiny Umoren in self-defence has no single bruises on his body. Wait till people start asking questions and watch the police give him injuries in custody afterwards to claim he sustained them while protecting himself #JusticeForHinyUmoren pic.twitter.com/eaCrPUZrrF

Uduak Akpan and his partners in crime will not know peace .

That press video of Uduak Akpan is nothing but a waste of time.

They offered him a chair, clean “Mudder Squad” branded T-shirt and granted him an interview like he just signed a record deal. This country will mess with your sanity. #JusticeforHinyHumoren