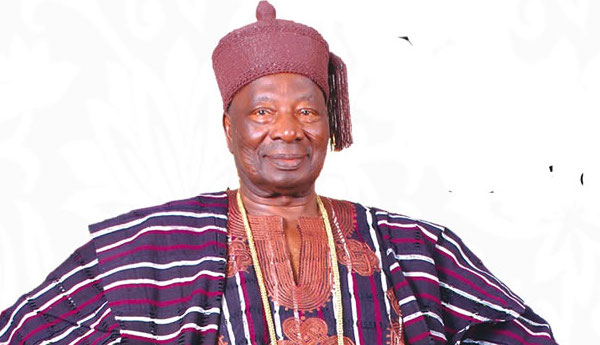 The Soun of Ogbomosoland, Oba Oladunni Oyewumi, on Monday dismissed reports of the killing of #ENDSARS protesters in his palace.

The palace was attacked on Sunday as #ENDSARS protests continued in the area.

The monarch was holding a meeting with the Minister of Youth and Sports Development, Sunday Dare, when the youths stormed the palace.

The Soun and the minister were ferried to a safe place by security agents who were at the palace at the time of the incident.

But in a statement issued by his Principal Secretary Mr. Toyin Ajamu, the monarch insisted that the palace was attacked by hoodlums who damaged properties.

He added that a chief was injured during the attack.

Oba Oyewumi urged the appropriate authorities to investigate the incident in a bid to bring the perpetrators of the attack to book and avert a recurrence.

The statement read: “The attack was perpetrated by hoodlums and miscreants, disguised as protesters against the Special Anti-Robbery Squad (SARS) leading to the wanton destruction of properties and vehicles at the palace. A chief among other palace officials also sustained injuries.

“Contrary to fake news being disseminated on social media, we state categorically that despite the needless provocations and ill-treatment meted out to the Royal household during the violent attack on the palace, the Paramount ruler and his household did not retaliate.

“Kabiyesi, who was with his chiefs and subjects including Minister of Youth and Sports Development (an indigene of Ogbomoso), when the hoodlums invaded the palace, advised the palace staff to refrain from attacking the hoodlums.

“Hence, none of the miscreants and thugs was attacked by the palace household but rather a chief, who was pelted with stones by the hoodlums sustained serious injuries.

“The dead bodies being circulated on social media were brought into the palace by the hoodlums to cause confusion and justify the attack on the palace.”

Related Topics:#EndSARSSoun of Ogbomoso
Up Next

Makinde orders police to stay away from #ENDSARS protesters in Oyo