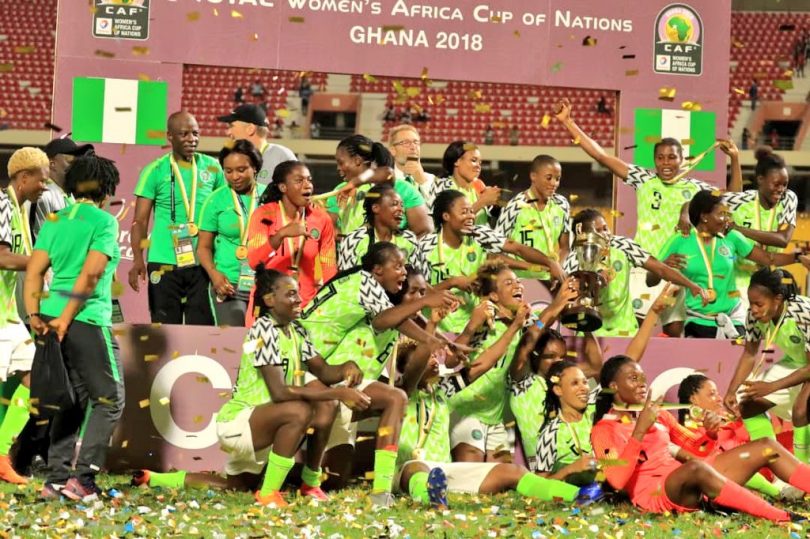 Nigeria women’s football team, the Super Falcons are to be specially celebrated during the 2020 Nigeria Football Federation – NFF/Aiteo Awards.

This was revealed by President of the NFF, Amaju Pinnick during a live breakfast television show with Arise Tv on Monday.

The 2019 edition of the Awards saw the celebration of the legacy of Super Eagles team of 1994, and Pinnick says it is time for the Falcons.

The Super Falcons have been the most successful football team in Nigeria, having been crowned Africa Women’s Cup of Nations champions nine times and have twice reached the knockout stages of the World Cup.

During the chat, Pinnick shared on, among other things, what to be expected of the country’s football when activities finally resume after the coronavirus pandemic, as all activities had been shut down since March 19, 2020.

“On our part at the NFF, we are working with stakeholders, taking a cue from FIFA to intervene in certain areas,” he said with regard to the COVID-19 outbreak.

“We will sit down with our partners, AITEO with regards to the AITEO Cup competition, to see how we can still put this year’s edition together.

“There is also the AITEO/NFF Awards. This year’s edition is meant to celebrate the Super Falcons.

“We have plans to celebrate them but we don’t know how to go about it. So, we will sit down with our sponsors to figure things out.”

Pinnick did not fail to commend the Federal Government of Nigeria for its efforts so far in tackling the coronavirus pandemic.

The NFF chief then called on “all of us citizens to join the global army to fight this virus off the planet.”