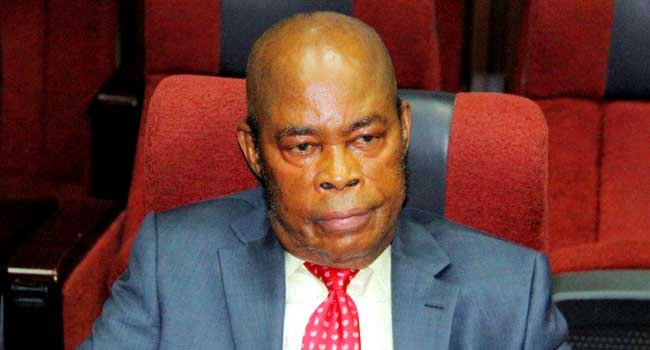 A Justice of the Supreme Court, Sylvester Nwali Ngwuta, has been reported dead, at the age of 69.

It was gathered that he died in his sleep, in the early hours of Sunday, at his residence in Abuja.

Ngwuta, born in 1951, was preparing to retire from the Supreme Court on March 30, upon attainment of 70 years mandatory retirement age.

Spokesperson of the Supreme Court, Ahuraka Isah, said earlier that the justice had been sick for some time.

According to him, Ngwuta’s sickness worsened, and he was subsequently taken to an intensive care unit. However, he said the deceased tested negative for COVID-19.

Ngwuta’s colleagues and well-wishers have taken to social media platforms to express their grief and to extend their condolences to the family.
READ ALSO: Justice Ngwuta returns to Supreme Court after three years of ‘technical suspension’

On Twitter, Tony Atambi Esq, with the handle @TonyAtambi, twitted, “Just received the sad news of the passing of one of our finest jurists, Hon. Justice Sylvester Ngwuta. My Lord Justice Ngwuta stood tall at the Supreme Court, bringing to bear quality erudition and fresh perspectives in his judgments. He’ll be missed. Rest in peace, Milord.”

Also, another user with the handle @Waliyadeniran, twitted, “Justice Sylvester Ngwuta was one of the brightest minds on the Supreme Court bench. It’s really unfortunate to hear of his demise just few months to his official retirement.”

He was one of the justices whose homes were broken into by the Department of State Service (DSS) in 2016.

Recall that operatives of the DSS had in the early hours of Saturday, October 8, invaded residences of some judges in Abuja, Port Harcourt and Gombe in a bid to arrest them.

Ngwuta had claimed the DSS raided his house because he rejected requests to pervert justice in Ekiti, Rivers and Ebonyi States.

Related Topics:justiceNgwutasupreme court
Up Next