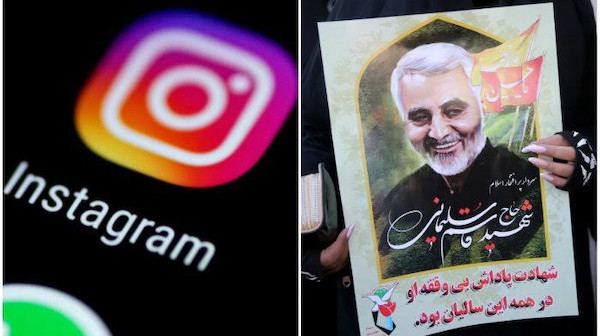 As the US-Iran dispute rages on and international communities begin taking sides, Facebook has announced its intention to yank off posts backing Iran over the US.

On January 3, 2020, a United States drone strike near the Baghdad International Airport had led to the assassination of Iranian major general Qasem Soleimani of the Islamic Revolutionary Guard Corps heightening tensions and triggering retaliation from Iran.

Facebook, alongside its other social networking site Instagram, has said its decision is to comply with US sanctions on Iran.

It will be recalled that Instagram had earlier expunged an account allegedly operated by the late Soliemani in April 2019, following US listing of Soliemani as a terrorist.

Some critics consider this move as social media policing and outright regulation.

Like the April deactivation of Soliemani’s account, this new Instagram/Facebook undertaking may further see these platforms battle to reverse their growing reputation as being narrowly pro-America as against an open platform with access for all.

READ ALSO: Why Buhari’s daughter should be commended for using presidential jet —MURIC

According to Iran’s Government Spokesman, Ali Rabiei, the decision to delete posts from users in support of Iran is undemocratic, arguing that users should be free to express themselves and associate.

Responding to remarks protesting against this decision, Facebook noted that its company operated under US sanction laws, including those related to the US government’s designation of the IRGC and its leadership.

Already, this censorship appears in force on Instagram as the platform reportedly deleted a post from Iranian soccer player, Alireza Jahanbakhsh, who despite having a verified Instagram account, was sanctioned for posting a photo of Soleimani after his death.

According to Instagram, posts supporting terrorists and their activities would not be spared on its platform.