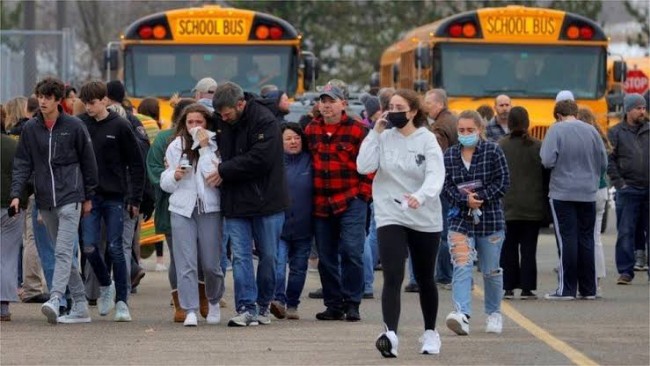 A 15-year-old boy has been arrested in Oxford, Michigan, after a mass shooting at the Oxford High School left three students dead and eight others seriously injured on Tuesday afternoon, authorities said.

The Oxford High School students who lost their lives in the shooting were identified as Tate Myre, 16; Hana St. Juliana, 14, and Madisyn Baldwin, 17, according to Oakland County Sheriff Michael Bouchard.

Eight others made up of seven students and a teacher, sustained various degrees of Injuries, Bouchard said, with three in critical condition, including a 14-year-old girl who was on a ventilator after having surgery.

The suspect, a sophomore at the school, was taken into custody without incident two to three minutes after authorities responded to the shooting, Bouchard said.

He is being held at Oakland County Children’s Village, a juvenile detention facility, and is on suicide watch where he is being checked on every 15 minutes, said an Oakland County executive.

At a news conference early Wednesday, Bouchard gave some more details about the shooting.

He said the semi automatic handgun used by the suspect has been recovered by law enforcement and was believed to have been bought by suspect’s father on Friday.

The weapon, a 9MM Sig Sauer SP2022 pistol was loaded at the time it was confiscated, and still contained seven rounds, Bouchard said.

A video camera in the school showed that the gunman “came out of the bathroom with the weapon and began firing at fellow students.”

Authorities recovered multiple shell casings in the school and believe around 15-20 shots were fired.

Bouchard said the suspect could be charged as an adult, though that was up to the Oakland County Prosecutor’s Office.