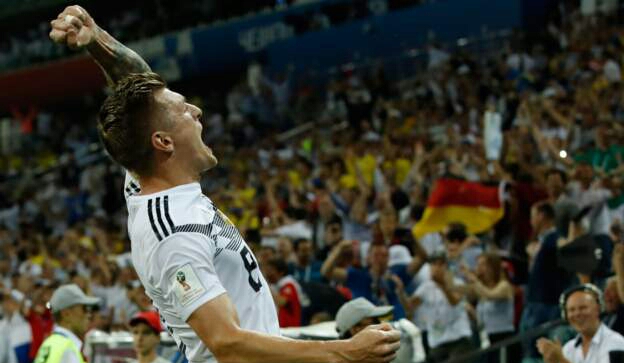 Second-half goals by Marco Reus and Toni Kroos saved defending champions Germany from the embarrassment of an early exit from the 2018 FIFA World Cup.

Having lost their opening game against Mexico, Germany were trailing 1-0 at half time against Sweden at the Sochi Stadium in Russia on Saturday.

The Swedes had gone ahead when Kroos gave the ball away in midfield and somehow it was chipped into Ola Toivonen, who then took the ball down on his chest and chipped it over Manuel Neuer.

But Germany, after the break, rallied back to level on 48 minutes as Timo Werner’s cross bobbled up and Reus got on it and diverted the ball in.

Read Also: Mexico on verge of W’Cup last 16 with win over South Korea

They dominated the game afterward but were down to ten men in the 82nd minute when Jerome Boateng was dismissed.

But all was not over as Kroos stepped up to take a 95th-minute freekick and the Real Madrid midfielder fired his country ahead to seal their first win – a crucial one – at the Russia showpiece.

A defeat would have seen the Germans out of the 2018 World Cup at the group stage. They would have become the sixth nation to do so since the inception of the competition.

But with the win, Joachim Low’s side have climbed to second spot in Group F, behind Mexico who are with 6 points from two matches.

Now, with their hopes of becoming the first side to retain the World Cup since Brazil in 1962 already revived, Germany will face South Korea next hoping to secure a slot in the last 16.

Sweden will battle Mexico concurrently in the other game of the group.