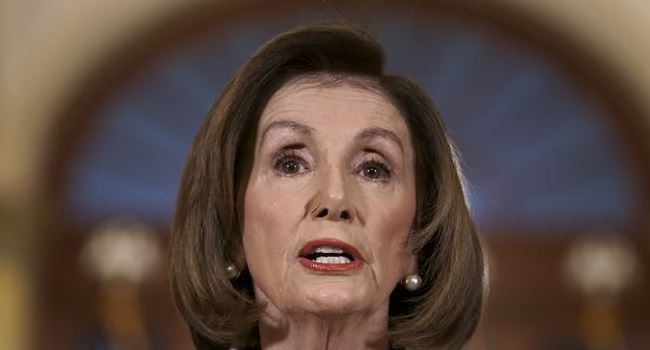 The President of the United States of America, Donald Trump abused his power for his own personal political benefit at the expense of national security, so says US House of Representatives Speaker Nancy Pelosi.

The House speaker who revealed that much late on Thursday on the sidelines of the ongoing impeachment inquiry against Trump said that she had instructed the House Judiciary Committee to draft articles of impeachment against Trump over his effort to pressure Ukraine to investigate a political rival.

“The facts are uncontested. The president abused his power for his own personal political benefit at the expense of our national security by withholding military aid and (a) crucial Oval Office meeting in exchange for an announcement of an investigation into his political rival,” Pelosi said in a televised statement.

“Sadly, but with confidence and humility, with allegiance to our Founders and our hearts full of love for America, today I am asking our chairman to proceed with articles of impeachment,” she said, referring to House Judiciary Committee Chairman Jerrold Nadler. “The president leaves us no choice but to act.”

Moments after Pelosi’s comments, Trump, who has denied any wrongdoing and called the impeachment investigation a hoax, responded in a tweet, saying, “This will mean that beyond important and seldom used act of Impeachment will be used routinely to attack future Presidents. That is what our Founders had in mind. The good thing is that the Republicans have NEVER been more united. We will win!”