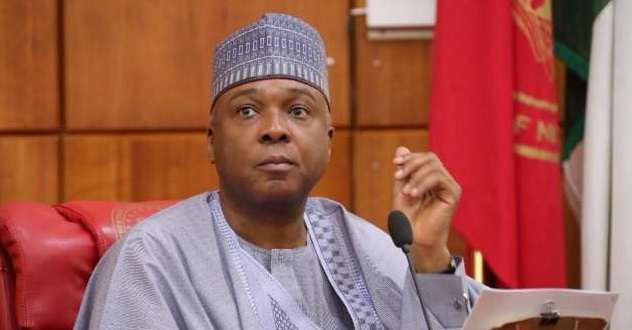 The media aide to Senate President, Bukola Saraki, Yusuph Olaniyonu, has said the Senate President does not have the power to unilaterally stop payment of salaries and allowances to convicted Plateau Central senator, Joshua Dariye.

Olaniyonu made the clarification when responding to enquiries adding that the Senate president does not possess such power except the Attorney-General of the Federation hands in a request.

According to him, except this is done, Mr Saraki cannot go ahead to declare the seat vacant.

Olaniyonu’s reaction is coming on the heels of a lawsuit instituted by the Socio-Economic Rights and Accountability Project (SERAP) asking the Federal High Court in Lagos to stop the Senate president from paying Mr Dariye his monthly allowances while he serves out a prison sentence.

SERAP also prayed the court to compel Saraki to declare the seat of Mr Dariye vacant and requests an order compelling Mr Dariye to return all salaries and allowances paid to him as a senator while in prison.

However, Olaniyonu insisted that these cannot be done without due process which includes the AGF.

“The SP (Senate President) does not have such powers except a request is made to him by the AGF who prosecuted the case and get court judgement. The request will be accompanied by the court judgement.

“The SP can then refer the matter to the legal department for advice. This will also require the SP to inform INEC about this development with a consequent need to declare the seat of such a senator vacant and a by-election in the district.”

The Senate President’s spokesman further noted that giving such power to his principal would raise eyebrows of opposition.

“If the SP has the right to unilaterally declare the seat of a senator vacant, then you are giving him the power that he should not have.

“You need to think of what APC will say if SP just declared the seat of its senator vacant.”

He questioned why the AGF has failed to hand in a request to stop payment of allowances to Mr Dariye, a move that will spur declaration of the seat vacant.

“Also, why would the AGF not inform the SP about the case? Is it because Dariye is his party man? Even when a member dies, the Senate goes to pay (a) condolence visit to the family as a way of ascertaining the fact of the demise of the senator,” he said.

Dariye, a former governor of Plateau State from 1999 to 2007, was prosecuted by the Economic and Financial Crimes Commission and was sentenced to 14 years jail term by Justice Adebukola Banjoko of an FCT High Court in June.

His conviction was however reduced to 10 years in November by the court of appeal after he appealed his conviction.