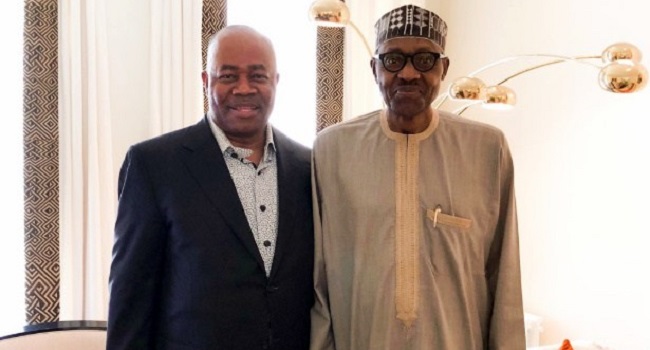 President Muhammadu Buhari has been denied use of the Godswill Akpabio International Stadium, Uyo, for his campaign next Friday, by the Governor Udom Emmanuel-led state government.

Buhari is scheduled to visit Akwa Ibom on Friday to flag off his re-election campaign in the state.

The All Progressives Congress (APC) had requested the use of the stadium for the campaign.

The state government had instead, directed the president and the APC to make use of another stadium – the Uyo Township Stadium – with a capacity lesser than the 30,000-capacity Godswill Akpabio stadium.

“The next season of the Nigeria Premier Football League (NPFL) is scheduled to begin on January 13, 2019. In view of this and the fixtures of home matches for Akwa United FC, it will be practically impossible to ‘regrass’ the stadium for pre-fixed matches, if used for non-sports activities, because of the nature of pressure that such events bring on the pitch,” the Commissioner for Sports in the state, Monday Uko, said in a statement issued on Friday.

“Additionally, The Maintenance Contractor (Julius Berger) had also advised that the present atmospheric conditions being very hostile to the pitch, the facility should not be used for non-sport activities during this harmattan period, so as to avoid inflicting long-term or irreversible damage to the grass on the football pitch,” Mr Uko said.

Uko said the explanation became necessary because “political actors and commentators” in the state were trying to use the issue to pit the state government against President Buhari.

The commissioner went further to say that the annual state-sponsored Christmas Carol night in Uyo took place in the Uyo Township Stadium, instead of the earlier proposed Godswill Akpabio International Stadium, because of the same reason.

The Christmas Carol night was held on Friday.

The commissioner added, “The stadium from its inception has been under a maintenance contract with Julius Berger Construction Company. They operate all the sensitive and non-sensitive components of the facility.

“They had closed for the year and proceeded on vacation (as it has been their usual practice) and are due to resume on January 7, 2018. The implication of this is that the technical capacity required to activate the venue is currently unavailable, and this is not within our control.

“The Ministry has however approved, in the alternative, the use of the Uyo Township Stadium for the event. We guarantee that the approved venue is in perfect condition,” he said.

Buhari does not care about poor people in Nigeria- Obi

Why Senate is still paying Dariye in prison —Saraki’s spokesman