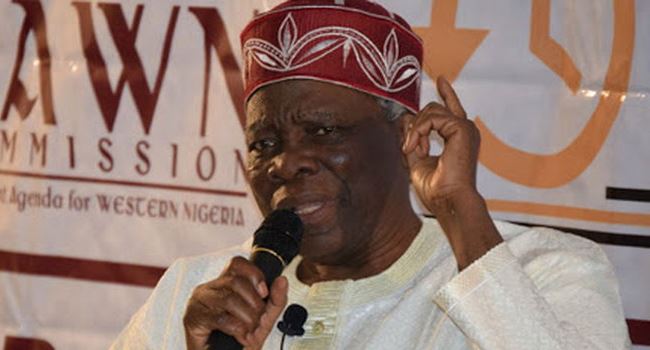 Secessionist plans continue to dominate the polity as two Yoruba groups on Saturday, April 17, disagreed on the ongoing agitation for the creation of the Oduduwa Republic from the present Nigerian state.

The Ilana Omoodua Youth Initiatives, led by a Yoruba leader, Professor Banji Akintoye, had insisted on having the Oduduwa Republic for the Yoruba nation, whilst another group under the auspice of Yoruba Welfare Group (YWG), disagreed with the position.

The secretary of the Ilana Omooduwa Youth Initiatives, Dr. Akin Adejumo, who represented Professor Banji Akintoye at a Yoruba mega rally held at Mapo, Ibadan, the Oyo State capital, insisted that the breakup of Nigeria was imminent.

“The nation is not working and there was a need for Nigerians to go back to the drawing board and make a profitable decision for their people,” Akintoye stated.

However, the National President of Yoruba Welfare group (YWG), Comrade Abdulhakeem Adegoke Alawuje, insisted that those clamouring for the Oodua Republic cannot decide for the Yoruba people.

In his statement during a separate news briefing in Lagos on Saturday, the group blasted the secession advocates, accusing them of attempting to destroy the peace, love and harmony of Yoruba land.

Alawuje warned them to desist from such advocacy, saying, “We are issuing a last warning to those behind the political agitation to stop all this rubbish in our land. Yoruba land cannot be a testing ground for any form of criminal activity.

“YWG is calling all traditional rulers in Yoruba land to call these people to order because it will not favour all of us to start mobilizing against ourselves in the same region.”