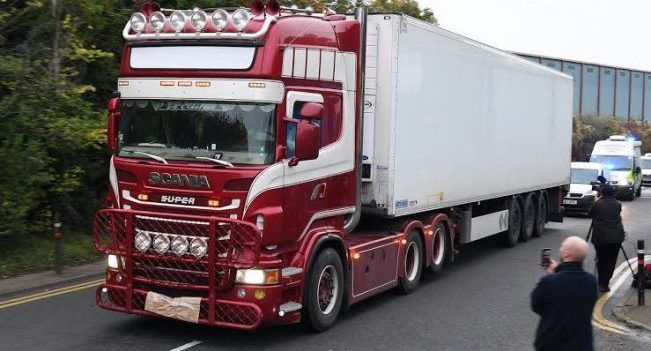 Two people have been arrested on suspicion of manslaughter of 39 people found dead in a refrigerated lorry in Essex, in the United Kingdom.

The man and woman, both 38, from Warrington, Cheshire, were also held on suspicion of conspiracy to traffic, the BBC reports.

Detectives are still questioning the lorry driver on suspicion of murder.

The victims – 31 men and eight women – are believed to be Chinese. They were found at an industrial estate in Grays at 01:40 BST on Wednesday.

Essex Police has been given extra time to question driver Mo Robinson, of County Armagh in Northern Ireland, who was arrested on Wednesday.

Post-mortem examinations are due to start later after the first 11 bodies were moved from Tilbury Port to Broomfield Hospital in Chelmsford.

The trailer arrived in Purfleet on the River Thames from Zeebrugge in Belgium at 00:30 on Wednesday.

I was kept in dungeon for 4 months, I was raped daily; other gory tales of 108 rescued from ‘rehabilitation’ centre in Kwara