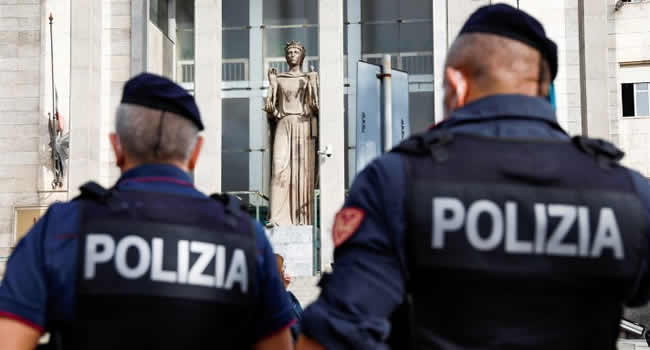 Thirty Nigerians suspected to be members of the Black Axe confraternity with links to the Mafia, have been arrested by the police in Italy.

Italian police reported that the Nigerians were arrested late on Monday after an intensive investigation showed they have been operating in many regions of the country.

“Among those detained was the Black Axe’s alleged leader in Italy, a 35-year-old Nigerian man who lived in L’Aquila, in the central Abruzzo region,” the statement said, noting that the suspect’s name was not given for security reasons.

“There is evidence that the members had a direct connection with the Nigerian gang, drawing on the same vocabulary, symbols and affiliation rituals,” the statement added.

“The police operation started as a probe in L’Aquila, and involved the search of more than 25 domestic residences.

“All those seized were Nigerian nationals and arrests were carried out across Italy.

“Most of their crimes were committed on the Internet, including using bitcoins on the dark web to purchase the numbers of cloned credit cards, which were used for online shopping sprees.”

Italian Interior Minister, Luciana Lamorgese, who commended the police for tracking down and arresting the gang said in a statement:

“This proves the ability of the judiciary and police forces to fight against old and new mafia groups which are trying to extend their criminal reach and expand their business.”

Gumi says bandits he negotiated with have repented, stopped kidnapping