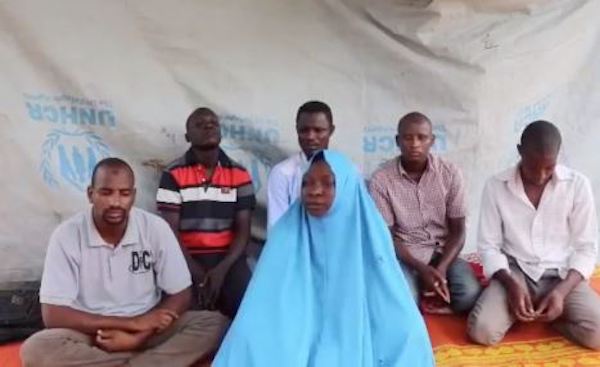 Six humanitarian workers and staff of Action Against Hunger (ACF) who were abducted by suspected Boko Haram insurgents last week, have begged the Nigerian government “to do something” about their release.

In a three-minute and 17 seconds video clip released on Wednesday by the Islamic State West Africa Province (ISWAP), a woman, who identified herself as Grace Taku, is seen speaking on behalf of five other abducted men sitting behind her.

The six were seized during an ambush on their convoy close to the border with Niger on July 18, in an attack that left another driver dead.

Grace Taku, while appealing to Federal Government, Christian Association of Nigeria (CAN) and the international community to come to her rescue, claimed that Leah Sharibu alongside one Alice has been killed by the insurgents.

According to her, Leah Sharibu, a Christian who was the only one not released among the 110 Dapchi schoolgirls kidnapped from Yobe State, was killed because of the Federal Government of Nigeria’s inability to “do something”.

The transcript of her appeal reads: “My name is Grace, I work with Action Against Hunger, an NGO in Borno State; my base is Damasak. We went to work on Thursday, 18th July 2019. On our way going Back to Damasak by Keneri/Chamba ward, we were caught by an army called the Kaliphas and they brought us here. We don’t know where we are.

“I want to beg the Christian Association of Nigeria because I am the only Christian among the six of us here. I want to beg that CAN should please do something about me to see how I can be released. I call on Borno State.

“I beg Action Against Hunger. We have families, some of us have children. We are Nigerians who are working for Nigerians. I am begging please, I am begging again, please do something to see that we are released because this has happened in the Red Cross before where some ladies were caught, Hauwa and Zipporah. They also asked to be released but because of Nigeria did not do anything about it, they were killed.

“I am begging on behalf of all of us. I don’t want such to happen to us and it also happened again with Leah and Alice, because Nigeria could not do anything about them, they were not released they were also killed.”

Meanwhile, Action Against Hunger has also demanded the release of its workers; a staff member, two drivers and three health workers for one of its projects in Northeast Nigeria.